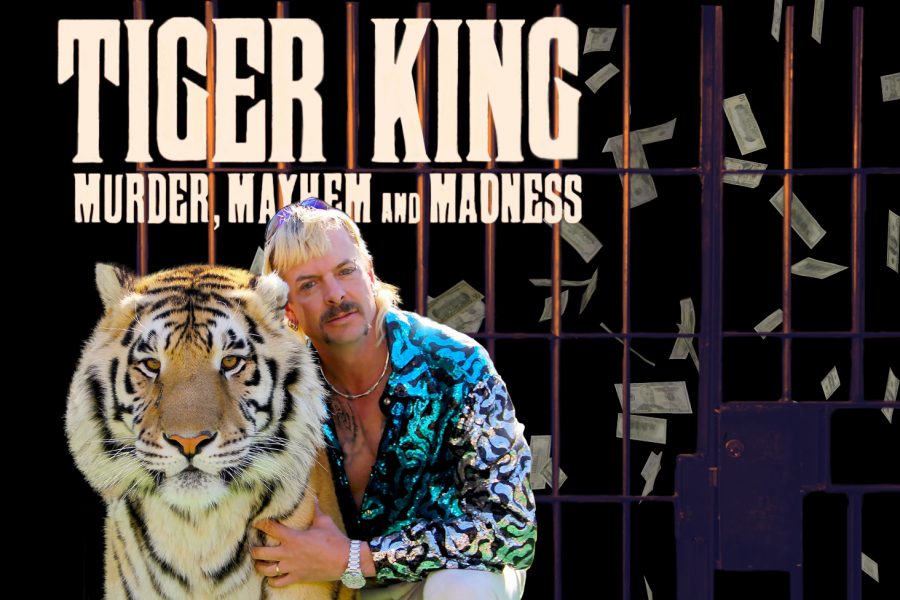 Finding a place to begin describing “Tiger King: Murder, Mayhem and Madness” is difficult. Practically, the only constant in this series is the pure, unadulterated chaos that follows the individuals documented. However, this is by no means a bad thing.

Without a doubt, “Tiger King” is one of the best shows to watch right now, and it could not have come out at a better time. With the world in its current state, it’s nice to sit back, relax and watch something completely off the walls that is crazier than current events. The best part of it all is that it’s a completely true story.

Joe Exoctic, our “protagonist”, is a gay, polygamous, self-proclaimed hill-billy and Tiger King in the middle of Oklahoma. Those are only the amount of words that could be used to describe Exotic that would reasonably fit in a sentence. He owns one of the largest exotic animal parks in Oklahoma, of which the documentary primarily focuses on his ownership of big cats. At his zoo, he interacts with the big cats, breeds them and people pay to take pictures with tiger cubs. For these reasons, animal rights activists feel that he exploits tigers for personal gain. The show follows Exotic’s struggle against animal rights activists, as well as the interpersonal relationships both within and outside the zoo.

Carole Baskin, owner of Big Cat Rescue in Florida, is Exotic’s main opponent. At her rescue, everything is completely hands-off. No breeding, petting or explicit exploitation occurs at the rescue. It is nothing more than a sanctuary where they house, feed and care for endangered big cats. She has been the biggest figure in the “fight” against people like Exotic for years. Of course, Baskin sounds like the “hero.” Her husband even calls her the “Mother Teresa of big cats.” However, Baskin is not the “good guy” she seems; she has sinister secrets of her own, one of which being the conspiracy that she killed her ex-husband and fed him to the tigers. Believe it or not, that is not a joke.

What had began as a disagreement on how big cats should be treated mutated into a tangled mess of back-stabbing, lies, millions of dollars in lawsuits and even a murder for hire plot against Baskin. Insane, isn’t it? The mayhem doesn’t stop there though.

Furthermore, we get a look into several others in the business of owning cats, some of whom also happen to be felons, crime lords and egotistical narcissists. Quite frankly, you often have to remind yourself that these are real people, real events and that this is a true documentary. It cannot be stressed enough how unhinged this series gets and how incredible it feels to watch it all unfold.

There are many good things to say about this series. Chaos aside, it is filmed very well. The timeline is concise and easy to follow, and despite the unbelievable twists and turns in the story, the directors and producers never failed to piece together the insanity in a way that viewers can easily understand. Not only that, but the audience is able to learn much more about the underbelly of the world of big cats. It perfectly shows the problems and raises awareness of the issues facing captive tigers as well as their owners.

While there aren’t many negative things to say about it, there are a couple of things that may turn you away from it according to your personal beliefs. It is vulgar and explicit at times, but never when it is not necessary. Vulgarity and explicivity is used in a way that truly shows what life is like for the people involved. Moreover, there is occasional imagery or themes that may be disturbing, such as old, raw beef and euthanization.

Overall, “Tiger King: Murder, Mayhem, and Madness” is a must-watch during your months-long not-so-vacation. Unless you find certain aspects of its content disturbing, there is no reason that one shouldn’t dive headfirst into the world of Joe Exotic and the madness that follows him. Everything given in the synopsis is nowhere near all there is to the story. Director Eric Goode does an impeccable job of unleashing this story to the masses in all of its shocking glory. Not only does he manage to show a narrative that has you hooked till the very end, but he also exposed the plight that faces big cats in America. Bottom line, this series will not leave you disappointed.