A new place for politics

Political clubs merge into one 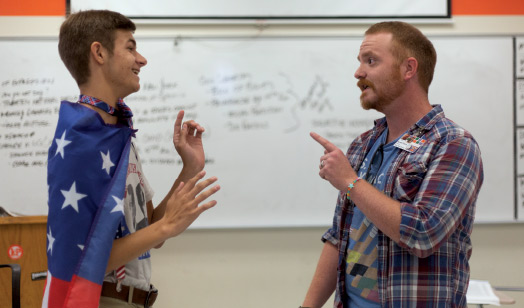 Two of our school’s most controversial clubs, at odds with each other for years, are no more. The Teenage Republicans and Young Democrats clubs disbanded at the end of last school year. From the ashes, the Texas High Political Society was designated as the new place for politics on campus.

An unprecedented move, the objective was to provide a space for all students interested in politics. With one club, students won’t feel pressured to change their views to fit on one side of the political aisle.

“It would be better if we didn’t have a divided club setting,” club sponsor Hunter Davis said. “There are people who aren’t Democrat or Republican, and they didn’t have a place to fit. So I thought if I did one sweeping motion, we could get all political ideologies in one place.”

Supporters of the merger also believe there is value in the future arguments, an inevitable byproduct of sending those with opposing views to the same meetings. Davis believes that exposure to different beliefs will add to the students’ understanding of today’s political climate.

“Kids don’t like being told they are wrong, and they don’t like people disagreeing with them,” Davis said. “So, if they can accept other people’s viewpoints without getting angry, then I think they are going to be just fine.”

However, good intentions behind the union weren’t enough to prevent critics; various students from the previous clubs are skeptical of the  changes and question the logic behind combining the clubs.

“I don’t like it. I’m not going to lie. I kind of wanted to participate in the Teenage Republicans this year,” former Teenage Republican vice president Remington Cook said. “But unfortunately, now all we have is the Texas High Political Society.”

Cook was looking forward to transforming the Teenage Republicans club from its previous state, quick to cite many flaws from last year, especially in club events like the “Change my Mind” tables.

“The ‘Change my Minds’ in theory, were a good idea to open up political discussion,” Cook said. “But at the end of the day [the club’s leadership] used the [events] to incite conflict and invite negative argument. It was provocative.”

The merger’s detractors are predominantly former Teenage Republicans, likely because it was their future plans that were cut short by the change.

“What my hope for the Teenage Republicans club was to transform it into a volunteer organization. We could get a lot of community work done this year,” Cook said. “And now, it just doesn’t exist.”

This isn’t to say the new club is without their own plans, however. Davis envisions an eventful year for the Political Society, with many events revolving around the primaries.

“We do debate watching nights. We’ll do that going through the primary season,” Davis said. “Whoever joins next year will get to join the general debates as well.”

Those interested in joining or learning more about the THS Political Society, see Mr. Davis in room 93.