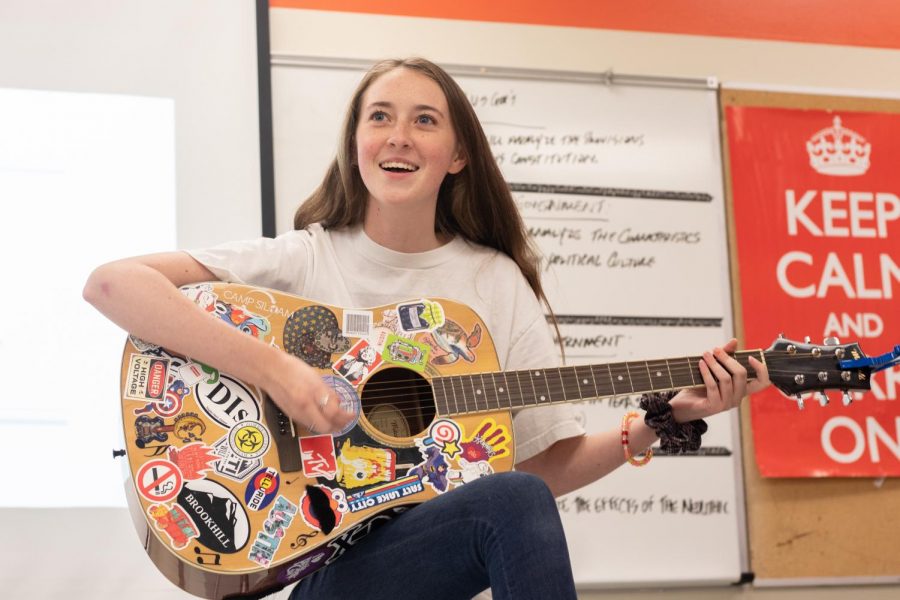 Junior Lia Graham leads the guitar club in a "jam session". The club met for the first time Wednesday September 11 after school in Mr. Davis' room.

Music plays an important role in many people’s lives. It is universally known for bringing masses together and allowing people to express themselves in different ways. Junior Lia Graham established a club where members can play music as a group and give back to the community.

Graham established The Guitar Club with the club’s sponsor, teacher Hunter Davis. Meetings are held once a month in room 92 from 4:00-4:50 p.m. The first meeting was held on Wednesday, September 11, where they discussed club goals and other information. To conclude the meeting officers led the club by playing a song.

“[The first meeting] went really well. [This is] a good group,” Graham said. “I feel like this year is going to be really great.”

During the first meeting, officers and members introduced themselves. Officers gave a breakdown of basic information about upcoming plans, possible events and ways to give back to the community.

The club is teaming up with Angels for the Aged, a hospice club established by juniors Charli and Johnni Hueter in which students visit retirement homes to give company to senior citizens, to perform a Christmas concert at a retirement home.

“Community service is a great way to give back to the community, and to combine that with music is such an amazing opportunity for members of The Guitar Club and Angels for the Aged to have,” Graham said.

The officers led the members in a “jam session” of the song “Ho Hey” by the Lumineers to end the meeting. Jam sessions bring the group together in a musical way, and are something Graham is excited to see progress throughout the year.

“I feel like [jam sessions] are gonna be a lot of fun, like, a lot of laughter is gonna be put into them,” Graham said. “This club isn’t a strict rules and regulations club. It’s more of ‘hangout together and play music.’”

A misconception about the club is that you must know how to play guitar to be a member; However, the club is open to anyone looking to learn guitar, as well as those who know how to play an instrument other than guitar. The Guitar Club is intended to be a space for people to express themselves, meet new people and develop their skills as musicians, and members are excited to be a part of it.

“[The meeting] went very well. The atmosphere and open discussions felt very welcoming,” senior Max York said. “[I’m looking forward to] seeing music in a variety of new perspectives given by other members and broadening my musical tastes.”

Graham expects there to be much trial and error this year. However, she knows this will make the club stronger as well as more prepared for the years to come.

“This is a new club, a lot of the stuff we do has never been done before,” Graham said. “Next year, if the stuff we did this year doesn’t work, we’re gonna try again.”