Choices revised for next year 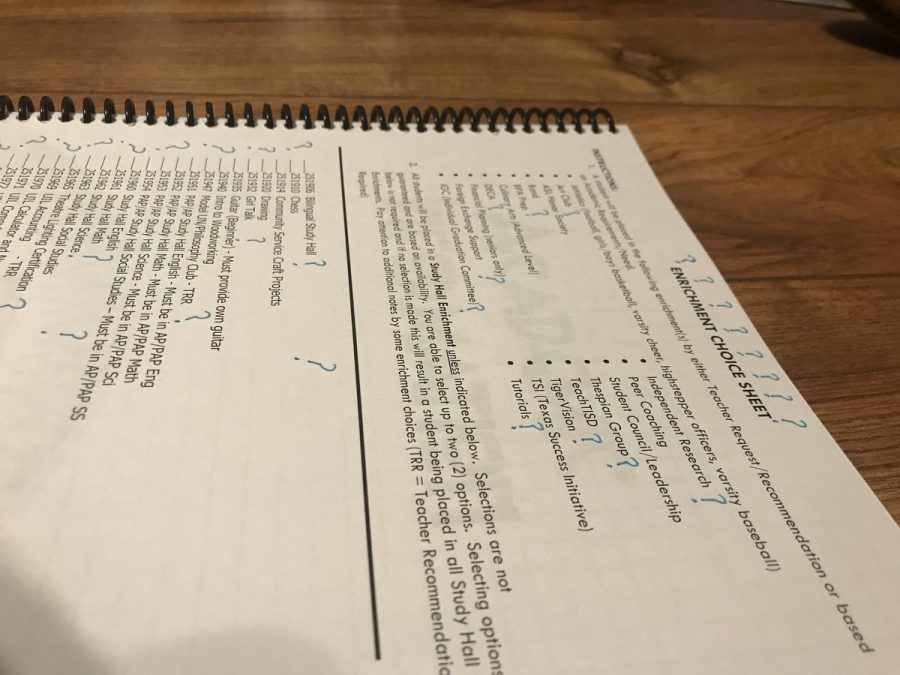 Many choices for enrichments were eliminated for next year.

As students flipped through the multicolored pages of their choice sheets, one page appeared far less lengthy than the year before.

Several enrichments were cut for the 2020-2021 school year, with mostly UILs, tutorials and study halls remaining.

“We had this huge, two page list of enrichment options, and we weren’t really getting students to [select the less popular ones],” assistant principal Lauren Pilgreen said. “This year we decided to really cut down on them since [the feedback] we were getting is, ‘We just want [a] study hall.’ We’d have one person request crocheting, one person request classic films and one person request travel.”

Many enrichments cut were not academic, such as genealogy and learning French through musicals. Other abandoned options include creative writing and classic films.

“Classic films is a really chill enrichment where we watch old classic films,” sophomore Ethan Power said. “I’m pretty sad [it isn’t offered next year] because I’ve taken it twice already, and I was just hoping to take it again.”

With movies of choice ranging from “Casablanca,” to “Aladdin,” the classic films enrichment covers a wide scope of Hollywood’s most renowned works. As well as entertaining Power, the class has also benefited him academically.

“Recently, I used “Twelve Angry Men” [as an example] in one of my English essays,” Power said. “It was a really good example to use.”

Also taken off the choice sheet for next year is creative writing. In this enrichment, participants create their work based on prompts, or they are given the option to write freely.

“The enrichment [improved] me as a writer because it pushed me out of my comfort zone and out of my normal writing styles,” sophomore Jessie Gamble said. “It allowed me to explore other genres of writing, and other students were able to give feedback on my writing and how I could improve.”

Enrichments like these were not the original purpose of 30 minute time slots between first and second period. They were mainly created for students struggling in state tested subjects.

“[Enrichments were] designed for tutorials, number one, so students who are not successful in [EOC tested subjects] would have a solid 30 minutes to get some intensive help in order for them to be successful,” Pilgreen said. “This is so important because if you don’t pass [these tests], you don’t graduate in the state of Texas.”

When Texas administered Texas Assessment of Knowledge and Skills (TAKS) tests, students who failed these exams took tutorials as an entire class period. Enrichments were designed as a less time consuming alternative.

“I don’t want to say [tutorial focused classes were] a waste of a period, but we had students who wanted to take all these other classes and didn’t want to use up a whole period for a tutorial class,” Pilgreen said.

Enrichments are also designed for students in extracurricular activities. Many options that stayed on the choice sheets for next year are UIL academics.

“We also thought that this would be a great time for certain clubs and organizations to meet, so that we weren’t bombarding students with either before school or after school activities,” Pilgreen said. “Our students are involved in so many different things that if a student wanted to compete in a UIL activity, the only time to practice was after school. Well, that student might also be involved in 20 other things. It really became a scheduling headache, and we thought this 30 minutes was going to allow time for that.”

Those not enrolled in UILs or tutorials take study halls or participate in several niche activities. The latter choice has created attendance issues.

“For the rest of the student body, it was supposed to be a time for students to get involved in something that they really wanted to be involved in,” Pilgreen said. “This is a 30 minute outlet to clear [their] minds of school work and tests and just give them 30 minutes to have fun. It’s supposed to be like recess for the mind, but some students are using it as recess for the body because they just wander around for 30 minutes.”

Makeup hours serve as a deterrent to those skipping classes. Students with excessive absences cannot attend school sponsored events such as dances. Limiting choices may discourage the tendency of students to roam the halls instead of attending their enrichment.

“We’re hoping that by putting students where they want to be and in the enrichments they need to be in, that will cut down on all of this wandering,” Pilgreen said. “We have students that are wandering about doing whatever they want during that time, and for me, that’s a huge safety concern. If I can’t find that student when their mom comes to check them out, that’s a safety issue.”

Enrichments were originally placed after second period, but they were moved to follow first period in an attempt to decrease wanderings. This new time slot has somewhat abated the issue.

“Compared to [when] it was before, I think the time change definitely helped,” Pilgreen said. “I do think that overall we could all be doing a better part to make sure that students are where they need to be. The honest truth is 95% or more of the student body is doing exactly what they’re supposed to be doing during enrichment, but we have a handful of students that continue to not do what they’re supposed to be doing.”

Despite a slew of changes for the upcoming school year, Pilgreen admits the enrichments are a work in progress.

“We haven’t found a model better than what we’re doing right now,” Pilgreen said. “If some school is doing it better than we are, and they have a solution [that makes] all the students and teachers happy, we’re all ears. But until then, I feel like what we have going right now is the best we can do for our school at the moment.”