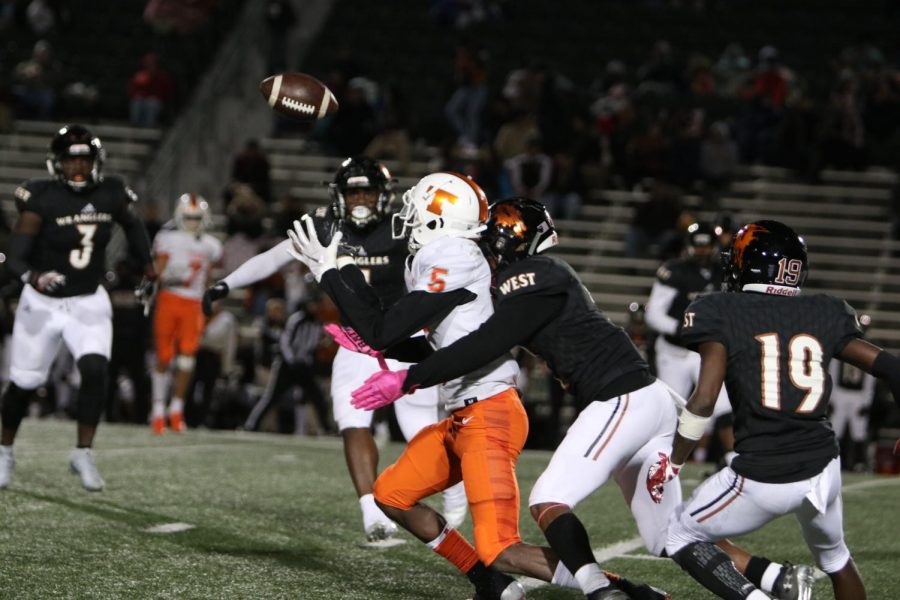 Junior wide receiver Rian Cellers attempts to escape a Wrangler defender and catch the ball for a Tiger first down. The Tigers lost to the West Mesquite Wranglers 49-21 on Nov. 9 in their last game of the season.

A 99-yard rushing touchdown by West Mesquite quarterback Neal Johnson seemed to be a fitting end to the Tigers’ season.

The Wranglers defeated the Tigers on Friday night by a score of 49-21 in both teams’ final games of the season. After a competitive first half, West Mesquite scored all of 28 points in the second half.

The Tigers responded early in the second quarter as Clack found Webster on a 27-yard pass for the Tigers’ second touchdown. It didn’t take long for the Wranglers to tie it up, though, as Johnson found wide receiver Dylan Wright for a 9-yard touchdown.

The Tigers pushed deep into Wrangler territory but were then offset by an interception from Clack. The Wranglers then took the lead after Johnson passed to Jordan for a 37-yard touchdown with only 2:22 left in the half.

The Tigers then marched down the field in their two-minute drill offense and capitalized on a trick play as senior defensive back Chris Lyles found junior wide receiver Rian Cellers in the back of the endzone from 29 yards out, making the score 21-21 with six seconds left in the half.

The second half was not as kind to the Tigers as various offensive mishaps left them gasping for points. Each team started slow before Wrangler defensive back Paul Christopher intercepted Clack and returned it 55 yards for a pick-six to give them a 28-21 lead.

As the fourth quarter began, the Wranglers converted another drive into seven points as Jordan punched in the ball from a yard out. After another interception by Clack, Johnson again connected with Wright for a 22-yard touchdown to double up the Tigers.

The final offensive touch for the Wranglers exposed the defensive issues that had plagued the Tigers all year as Johnson scampered 99 yards to increase the Wrangler lead. From there, the Tigers held on to the ball to see the clock run down to triple zeros.

“I think [the end of the season] is kind of bittersweet,” Sutton said. “You know it’s coming, but you just got to be ready for it. We gave it our all, and that’s all you can ask for. We just made some great memories.”

Offensively, the Tigers started out consistent in the first half but faltered in the second half with some costly turnovers along the way. On the night, the punter remained on the sidelines as head coach Gerry Stanford elected to keep his guys on the field on fourth downs.

“I think offensively we had some things going,” Stanford said. “The kids did a really good job executing, but [there were] a couple of misfortunate plays here and there.”

Despite the Tiger defense missing some key starters due to grades, the Wranglers racked up 549 yards of total offense including 400 yards on the ground, the highest total the defense has allowed all season.

“We put in a lot of work,” Reid said. “[The season] didn’t really end the way we wanted it to, but I love all these guys on my team. I won’t forget them or my last high school game.”

Clack completed 15 of 34 passes for 248 yards with a touchdown and three interceptions. Sutton ran the ball 21 times for 111 yards and a score. Webster had seven catches for 126 yards and a touchdown grab.

The Tigers now begin an off-season that sees many of their starters graduating. This will require many young players to step up and fill their places.

“The first thing they need to have is leaders,” Reid said. “They need to work their tails off in the offseason, and they have to love one another. Trust me, they got chemistry, and they have a big season ahead next year. I hope they do well.”