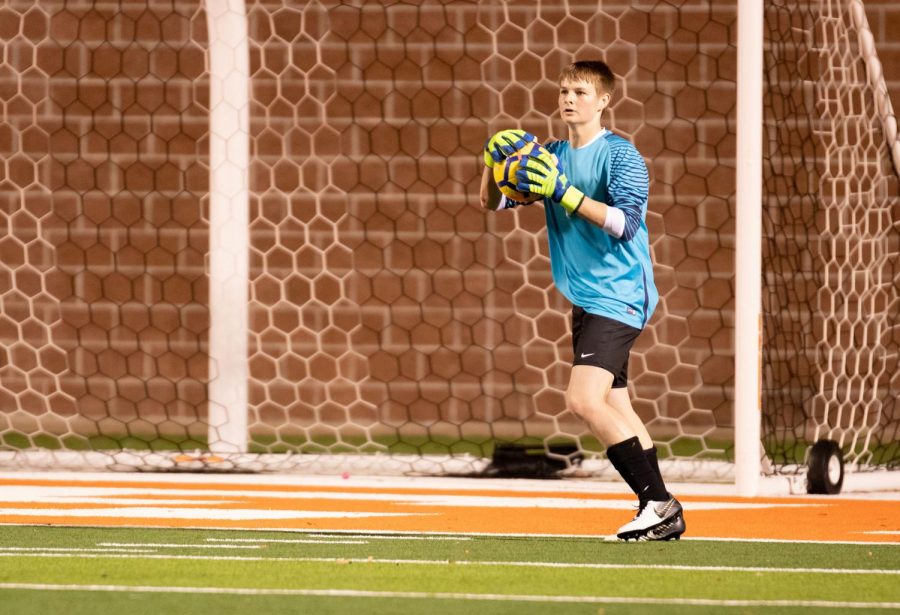 Senior Kemper York serves as the goalie on the Boys Varsity Soccer Team. Kemper transferred to Texas High at the beginning of this year.

Kemper York is a new student this year and plays for the boys’ varsity soccer team. His passion for soccer started at a young age and has been an integral part of his life ever since.

“I started playing when I was five years old,” York said. “I decided to play because my parents wanted to push me to play extracurricular sports and get involved.”

York did not truly become involved until he was 12 and joined a club team. After finding his place in the team dynamic, he soon found his passion was on the field and truly began to play competitively on a team. After transferring to Texas High, York quickly became an asset to the varsity team.

“I moved here as a new senior, and I joined because love soccer,” York said. “I think I bring my leadership and physical skills to the team, and [I] help [the team] to be a cohesive unit.”

York’s father, a member of the military, has instilled good qualities in him useful on and off the field by raising York in a unique way.

“[My household] is a very strict household, but it’s really a good thing in that it gives me good guidance [and by] making sure I live up to good standards [that I] take out on the field,” York said. “Those skills have helped me here, especially by getting on this team and just being a good player.”

York claims that his ability to adjust to new situations quickly stems from moving often as part of a military family.

“My dad’s involvement in the Army has only affected my soccer career for the better,” York said. “Moving to new places and trying out for new teams taught me to be a better team player and to be adaptable to new and tough conditions.”

Although York responded with little enthusiasm when his parents first pushed him to get involved in sports, he has since discovered a true passion for playing soccer, and has garnered the support of his family.

“They support in the way that they will push me as long as I push myself,” York said. “I have very high expectations of myself, and my parents reciprocate those expectations thus pushing me to do my best.”

York’s constant moving around the nation has made his transition to joining and getting to know the new team easier.

“I develop good relations with new teammates by just trying to be a part of the family,” York said. “All of my teams have been like families and it’s just like welcoming a new member.”

Soccer has played a huge role in York’s life, but he does not plan to pursue a career in soccer. He, instead, plans to be a lifelong adoring fan.

“This is my last year playing soccer at the top level for sure,” York said. “I won’t play at varsity level again like in college, but [instead I’ll] play for an intramural club. Being a [varsity] player is a major commitment and not essential to my future career. [However], I love soccer and will be a fan for the rest of my life.”