Tigers lose second round of playoffs 45-30 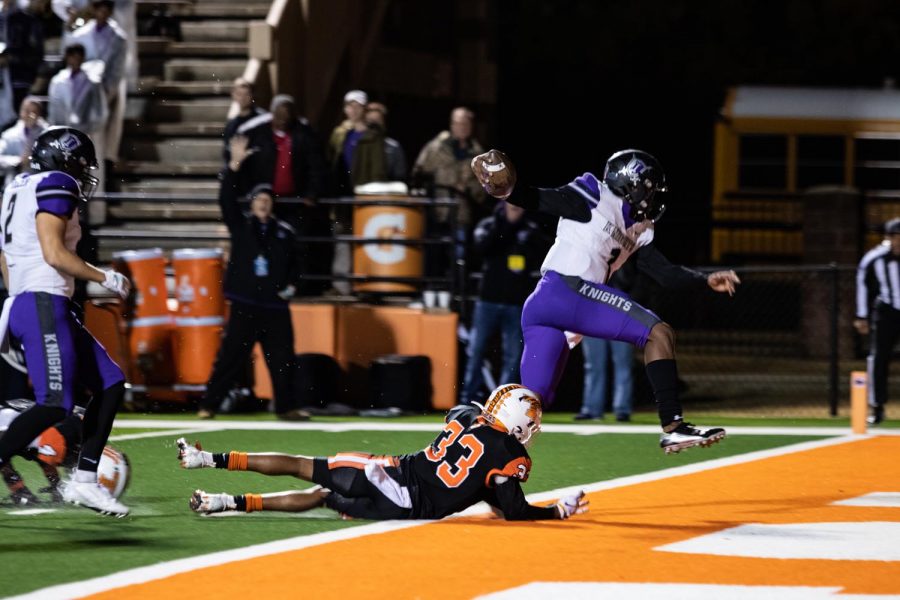 Sophomore defensive back Jalen Jones attempts to tackle Frisco Independence quarterback Braylon Braxton as he scores a touchdown in the second quarter of the 5A D1 Area playoff game on Nov. 22 at Tiger Stadium. The Tigers met an end to their football season in the second round of the playoffs with a 45-30 loss.

Storming the field to AC/DC’s Back in Black through a screen of fog, the Tigers made quite the spectacle to jumpstart their second playoff game. This particular song choice was no mistake, but a reference to the return of the Tiger’s famed all black jerseys. However, the electric atmosphere of the crowd was not enough to secure the Tigers a place at Regionals.

The Tigers lost to the Frisco Independence Knights with a final score of 45-30, ending an eventful post-game season.

After receiving the kickoff to start the first quarter, the Tigers were on track to live up to what the eye-catching entrance promised, when after a series of successful drives, Kicker Oscar Hernandez scored a successful field goal.

After the quick success of the offense, the next test fell to the Texas High defense, who maintained the team’s first quarter momentum with a fumble recovery by Jackson Halter. Finding themselves only a few short yards from a touchdown after the recovery, the Tigers took advantage of this with their first touchdown. However, Frisco Independence met the Tigers with their own touchdown, making it clear that both teams intended to make the most of the first quarter.

“[We succeeded in] effort and execution,” Head Coach Gerry Stanford said. “We continue to do what we wanted to do and the kids did a good job executing.”

Into the second quarter, no team had the opportunity to catch their breath. Both teams kept up strong offensive momentum, kept fans on the edge of their seats, and led referees to chase their tails, yellow flag after yellow flag. As the clock counted down to halftime, Texas secured their lead even further with another touchdown, which ended up being matched by Frisco. What we saw from the Tigers kept consistent with the season they’ve had so far: a powerful start from the offense, but no shortage of penalties to hinder them.

It the first half, Texas High was not dissuaded by their opponents strong record. The close lead of 17-14 that ended the first half made an underdog victory seem possible. From the beginning of the playoffs, a return to Grim seemed unlikely. Once this game gave the Tigers an opportunity to revisit their home stadium, the Tigers realized going far in the playoffs was actually a possibility.

“This season really showed me the potential that we have. We can go past the first round,” Junior Quarterback Rian Cellars said. “The group of kids that are [graduating] and the ones coming up senior year make me think that we can go further than the second round next year.”

But the first half is only that — a fraction of what the Tigers could expect from the night. But when the underdog unexpectedly comes out of the first half with a lead, it’s easy to say that half the battle, the one for the team’s morale, has already been won.

“We were feeling pretty good at the end of the first half. We really thought we had it,” Cellers said. “Then we made some mistakes, we had some flags, and that cost us the game.”

When the showmanship of the band and drill team subsided to bring halftime to a close, Frisco Independence found themselves receiving in the third quarter. Independence’s Quarterback Braylon Braxton stood out as a strong player when he made quick work of turning a drive into a touchdown to give Frisco a their first glimpse of the lead they would be fighting for.

An oddity of the third quarter, but no doubt a welcome one to Tiger fans, fate and slippery fingers seemed to work in tandem to turn a punt to Independence into a Tiger recovery. This made it all too easy for a few short drives to lead to a touchdown. This pushed Texas High back into the lead. This time however, the Tigers found themselves with less breathing room than the first half graced them with, maintaining a tight lead of 23 to 21.

In a show of what their offense is capable of, Frisco Independence again relied on their QB to successfully score. This gave the crowd a glimpse of the strong offense they could expect to see for the rest of the night. And when Independence’s QB scored yet again, many at Grim were left wondering if the promising first half was a fluke, and questioning if the Tigers could ever gain back their previous momentum. After a dismal third quarter for Texas High, leaving them behind 35-23, the Tigers realized they would likely be forced into a game of catch up in the fourth quarter.

And the news only got worse for the Tigers from there. A third consecutive touchdown, pushed Independence into an even stronger lead. This is where Texas High’s team and fans alike experienced their darkest hour.

“I don’t think morale changed, I thought we came out and battled and just had a couple of unfortunate things happen to us,” Stanford said. “Overall, I thought our kids gave a great effort all night long and all season long.”

However this isn’t to say no ground was made during the fourth quarter. The defense remained strong, and Texas High even scored once again. But the Tigers never got back to their previous momentum, and as morale weakened, cracks in the line only got larger, allowing Independence to gain even more ground with a field goal, ending the night’s scoring at 45-30.

In the face of defeats like these, our school’s motto is “Tiger Strong”. The times when this phrase is really tested, really questioned, are times like this game’s fourth quarter. It’s hard to maintain this motto when a touchdown pushes your team off their lead. It’s even harder when an unlikely underdog is pitted against the school ranked 7th in all of Texas. But times like these, is when following this motto really counts.

On the cold, drizzling Friday night, when touchdown after touchdown left the Tigers in a position worse than ever, Texas High proved their motto right. The crowd still packed the stands, unwilling to give up on their team. Cheer never relented in their chants. The student section was as lively as ever. And as the Texas High Band played the fight song for the last time this season, those Tigers who filled the field to sing along could be content that even when the scoreboard claims they lost, they won by remaining “Tiger Strong” and supporting their team to the end of the season.