How freshman Lydia Lee rose to the top in tennis 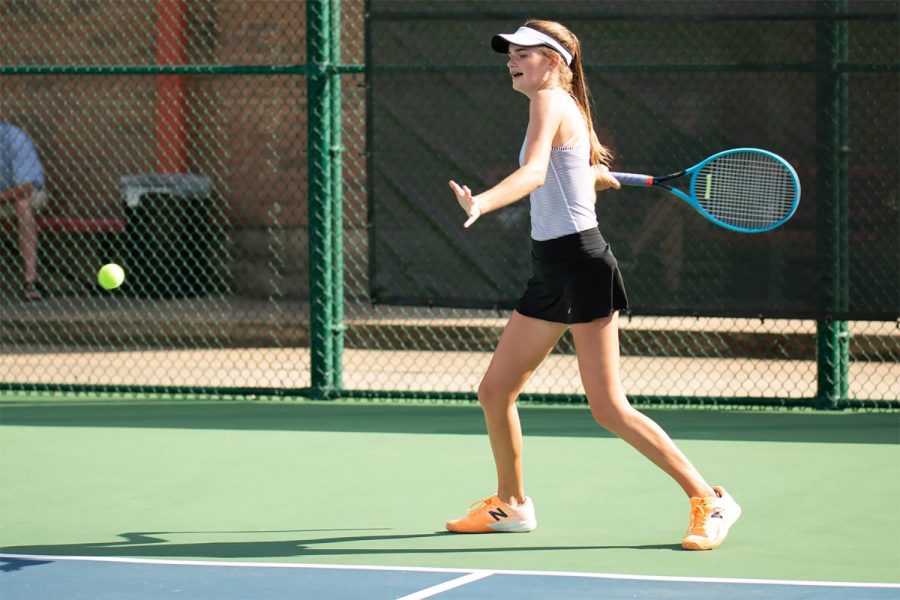 Freshman Lydia Lee plays tennis on the Texas High tennis court. Lee has played since she was three years old.

With each new school year brings new promising players for every high school sports team. These young athletes must work throughout their first year to prove they have what it takes to keep up with the upperclassmen they play against. Some have to climb over mountains during all four years to be able to play on the top spots in the game. But for freshman Lydia Lee, she has already proven her skills to be at the top of the ladder, otherwise known as the number one and two spots on the team.

Despite her young age, Lee was able to join the varsity tennis team after a grueling week of tryouts over the summer. Her skills on the court didn’t just develop overnight; after playing for almost 12 years, Lee has picked up a thing or two to figure out the best training schedule for her.

“I first started playing tennis when I was three years old,” Lee said. “I would go and play when my mom would play with her friends. I train everyday for at least two hours on the court, then [I] workout and try to get a run in. I try to do the same thing for the first hour every time I go out. Then I work on certain things I would like to improve the next hour.”

Along with her standard training regime, Lee has been presented with a secondary training opportunity. The varsity athlete has been given the privilege to travel to Florida as much as she is able to train with well-known coaches.

“I’m on the courts from 9-4 with a 30-minute lunch break,” Lee said. “It’s a very small group of kids that have the same goals [I do]. There are two coaches. One is [a man] from Argentina and the other is one of [his former students].”

This training program was not for the faint of heart. These students were pushed to their limits by the coaches with the long hours of practice. This only encouraged Lee to continue to prove herself.

“My first visit to Florida, I vividly remember the older coach with a microphone,” Lee said. “[He was] sitting on the court screaming at this girl as she was crying while she was hitting, and I watched him send her home for the day. I knew I had to bring my very best every day or that was going to be me.”

From travelling with her team for overnight matches to dinners after the tournament, Lee found support and friendship with her fellow teammates.Lee was able to find a family within her team. Before coming to Texas High, she would play most tournaments on her own. There was not a team cheering her on from the stands.

“I was very excited to be a part of the team,” Lee said. “I was so used to it just being me out on the court. One of the most rewarding things is when your teammates are on the fence watching you win a big match.”

Since joining the team, Lee was able to secure her place within the top spots on the ladder. That placement determines who she will play for challenge matches that determine her place on the ladder as well as tournaments and matches against other teams.

“Being top on the ladder is great, but there are expectations and pressure for you to always win or do well,” Lee said. “We all have bad days. I remember this one time I lost a hard match to a team we were easily beating, but I still felt like I was not helping the team.”

Troubles like these come with being an athlete. Sometimes, your game can just be off. Bad days can be fueled by heat, arrogant opponents, frustration and even injuries. A constant pain can keep a player from playing to the best of their ability.

Injuries can be very common in athletes. Many times, the pain can be diagnosed and easily treated. Other times, however, the patient is left without an answer, inhibiting them from continuing their game. Lee had an injury very similar to the common “tennis elbow”, but after many doctor’s visits, she had too many possible diagnoses that left many questions circling in her head.

“I’ve had an elbow injury in the past,” Lee said. “I went to so many doctors and tried so many things like dry needling, physical therapy and steroid shots to make the pain go away. Nothing seemed to work. I could only hit my backhand comfortably.”

After two years of treatment, everything fell back into place and she was able to play like she used to without significant pain.

Pain and triumph bring about Lee’s goals for her future in tennis. From high school to college, Lee is setting goals for herself to keep working hard throughout the rest of her years in tennis. And her determination to get there is as prevalent as ever.

“In the future, I hope to get to state,” Lee said. “My goals after high school are to go play tennis at a school of my choice. By no means am I there yet, but hopefully, when it comes down to it, I have worked hard enough so I can have that opportunity.”