Knee deep in the water some where 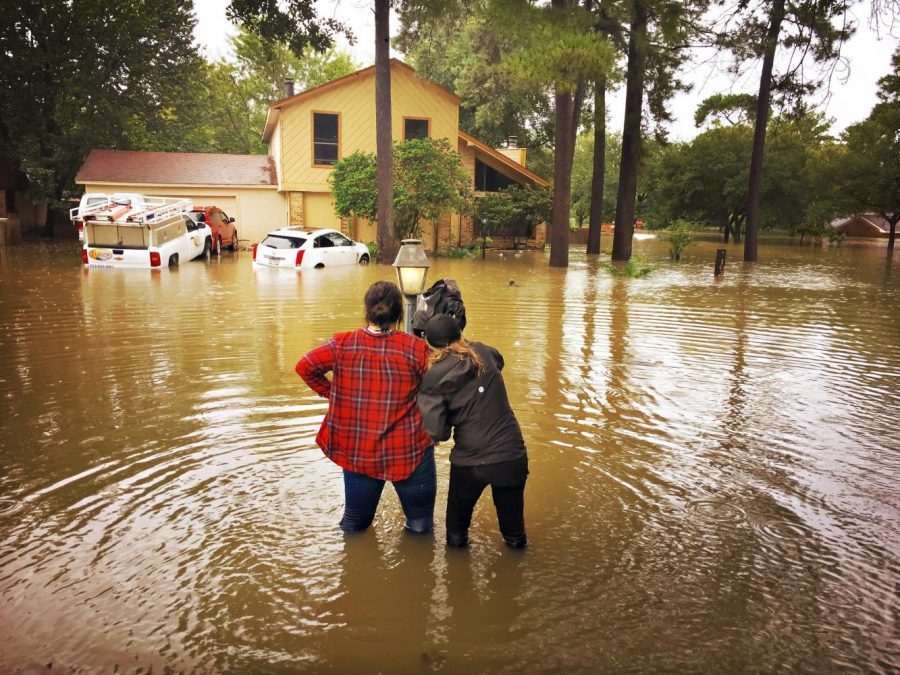 Standing in knee deep flood waters, she stares at the destruction that is slowly building before her. The deluge has swept away almost everything, including the lives of those who were caught in the crossfire. There is nothing remaining, save for roof tops peeking above the water, busted cars and snapped trees that point to the sky like an accusation. Families search for high ground, with nothing but the clothes on their backs, their identity and life stripped away.

She rips her eyes away from the sights and smells and is overcome with relief as she hears a boat coming to retrieve her. The familiar whir of the engine is calming; it means that a temporary, dry safe haven is soon to come. The driver holds out his hand to help her in, and as she settles in with a camera on her lap, she pulls her mental walls up. She is a journalist. She is professional. She is humane. And she is here to let the world know that humanity still exists, even in the midst of a hurricane ravaged city.

Texas High’s former student, and a staff member of THS Publications, Morgan Walker is now a freelance journalist who reports for international media centers. She is immersed in a world that is fast paced and staunch in dedication, but it is a career that gives her the most satisfaction.

“I moved to Los Angeles and took a job, and it ended up being exactly what I didn’t want to be doing, so I took a big nose dive into the freelance world which basically means that I work with a lot of different publications doing a couple of different things,” Walker said. “I call myself a ‘story producer,’ which means that I primarily focus on video journalism. I make short and long form documentaries mostly on social issue based topics and I work for nearly exclusive journalism organizations; I work for the New York Times, Washington Post, National Public Radio, TIME Magazine, Bloomberg, all kinds of places like that.”

In the beginning, she wasn’t sure exactly what route in journalism she was going to pursue, but after experiencing different forms of media, she quickly found her niche.

“I went to college at Western Kentucky University in Bowling Green, Kentucky; it’s a really great photojournalism school. I wanted to go to art school, but art school is really expensive and not super practical, and I think if I had done that I definitely would not be where I am right now,” Walker said. “When I was in high school I wanted to be a fine arts photographer. And my dad was like ‘no.’ Although he is very encouraging, he is also a realist and now I am very thankful. Now I make documentaries and I shoot stills like 30 percent of the time but my favorite part is the people element, and I just didn’t know that. So when I went to college, I learned what that meant and saw it in action, I became really obsessed with it.”

Sometimes her life doesn’t feel like reality, but nevertheless, she continues to chase after opportunities that only come once.

“I am freelancing right now and I love it; I love the flexibility that it gives me, it allows me to travel and to work on projects that I really want to work on. As a young person in journalism you can get put in a box. It’s really important that after your college years you establish yourself. Keep that drive and that hunger,” Walker said. “Sometimes it doesn’t feel real, like I was on the flight and I was thinking ‘What am I doing? I just got called by the New York Times to fly to Austin and cover the largest national news story in the country right now. What is going on?’”

Becoming a journalist is a competitive task to take on; it takes tough skin and a yearning to learn from people who may have more experience.

“I think early in my career, what I did well was meet a lot of people and work very hard and nearly nonstop, for six straight years. I was constantly working, looking for opportunities and meeting wonderful people who I admired,” Walker said. “I was consuming a ton of content, and I was learning what my taste was, what I liked and what I admired. I was meeting those filmmakers and photographers and I was asking for help and mentorship. I did that early in my career, and it served me well because I was able to quit a job that was not right for me and to become a freelancer. I think it has been the best move so far in my career. I am able to totally diversify my experience as a journalist and take on stories of all shapes and sizes all over California and now extending into the country.”

To other aspiring journalists, or anyone who is pursuing a competitive career, she insists that meeting people and making an impression is the most memorable thing one can do.

“I think what was the most important thing is to build a network of people who are going to encourage you and push you, and develop thick skin and the ability to be moldable, and to know that you do not know everything. I went to school and immediately became close to people who are older than me and more experienced,” Walker said. “I had incredible training as a young person and I had a good foundation, but I still had a ton to learn. So I would read work from people who are award winning pulitzer writers, and I would find a way to learn from people who are better. If you remain kind and willing to put yourself out there and potentially have your work torn apart over and over again, that is an admirable quality.”

Some of her favorite projects have been the most emotional, although Walker is humbled to be able to voice the ideas and views of those who need it most.

“My favorite story that I have worked on would be my Capstone project about youth, mental health and juvenile justice. It was about a boy, who at the time was 13-years-old and was a Bipolar young man who ended up going to jail because he had a psychotic break and burned down a barn. He spent two years in essentially solitary confinement in Kentucky. I learned how the juvenile justice system is helping in no way young people with mental illnesses and how that’s a real problem in our state and in our country,” Walker said. “I worked on that for about six months and that was my most favorite story because it was my most personal. I felt extremely attached and really proud to tell their story, and lucky too. I just worked on a story about abortion in Arkansas and that aired on the New York Times a few weeks ago. I think that was also pretty powerful.”

During tragic events that Walker covers, she must find a way to put the people first, even if that means putting her reactions aside.

“I feel like I don’t process until after the fact, usually. It’s just hard to work when you’re feeling everything and taking it all in. I don’t think there’s anything unprofessional about consoling people or being kind, I think you’ve got to be human first. You have to make a judgment call, to be a person’s friend and someone who is comforting. It’s a lot,” Walker said. “You don’t have time to let your brain process it, and you know it’s happening and that it’s horrible. I don’t think I will feel it all until on the way home.”

Her primary drive to keep pushing is the relationships she forms with other people.

“The people that I get to meet and know..No matter what I am covering, or what I am working on, it’s always the people. I wholeheartedly believe in documenting life and stories and listening to people because I think that we are all so interesting and unique. All of those intricacies should be celebrated and I just think that even when it’s a hard thing to do, it’s still an important thing to do. Just listen and let people share,” Walker said. “Like yesterday, we went to a person’s home, and she lost everything, she lost her son. With this particular instance, I know that the work that we do is important. This is an unprecedented storm, it hasn’t flooded this place in a hundred years and I think that the stories of what happened here, the good stories and the bad stories, deserve to be preserved. I want to do that to the very best of my ability. I think that when people experience tragedy and loss and happiness and total joy and relief, I think all of those emotions are worthy of preserving and documenting. That’s what keeps me going, it’s what we all deserve.”