Students explain their transition to secularism 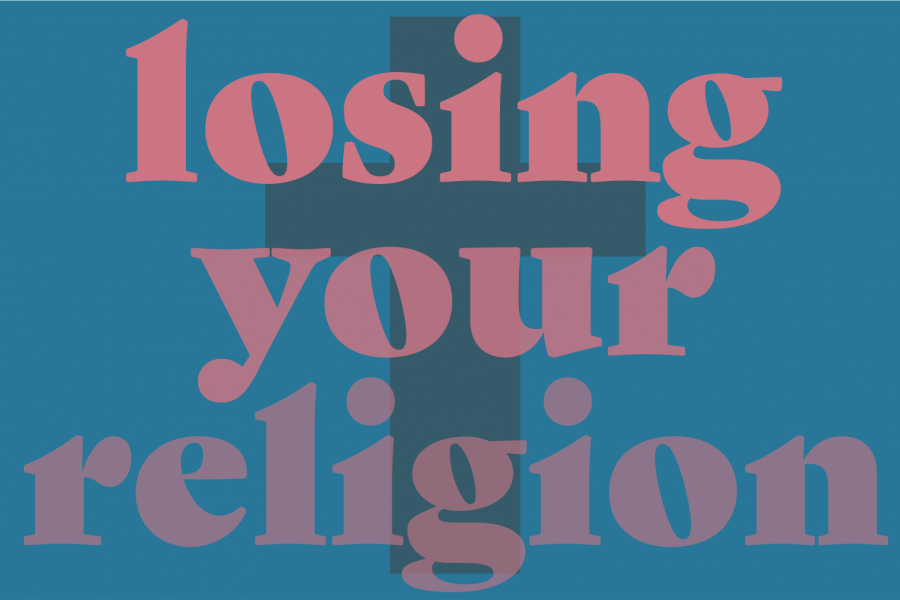 Her smile probably stretched beyond measure as she celebrated another year of life. Her memory of her eleventh birthday is foggy, but the festivities most likely began per usual.

Gifts pile on tables like avalanches as loved ones sing an off tune rendition of “Happy Birthday.” She blows out the candles on her cake to make a wish. Sophomore Alison Head might not remember what she asked for, but she knows what she did not ask for: for her God fearing grandmother to give her a Bible as a birthday gift.

But that’s exactly what happened. Instead of wondering what this year had in store for her, she examined her new brick of a book as she pondered one question.

What am I supposed to do with this?

As religious people raised in religious households, Head and other students, are used to uncomfortable encounters with family. They’re used to being in the minority. Above all, Head, *John Doe and sophomore Devon Pennington are used to reflecting on their views as they grow out of their parents’ shadows.

“[My family’s belief in Christianity is] pretty strong,” Pennington said. “It’s very evident. My parents talk about it a lot and want [my siblings and I] to believe in it too. [When I was younger], it wasn’t so extreme, but it’s gotten more extreme.”

Although Pennington no longer feels a connection to Christ, she once shared the same religious passions that her family does. Believing in a higher power was a source of comfort.

“When I was young, it was all I knew,” Pennington said. “I was fed all the good parts of religion, and never the questionable parts. It also gave me some sort of purpose at the time.”

The questionable parts of religion became more apparent to John Doe as he transitioned out of Christianity. Although four in every 10 LGBT Americans are Christian, the faith’s history against gay rights was evident in his household.

“My dad used to think I was gay because I have long hair,” Doe said. “He was like, ‘If you ever have gay thoughts, come to me.’ It was supposed to be comforting, but really, he was going to make me change.”

The pressure to adapt to the mold of the perfect Christian child was part of what made religion offputting to Pennington.

“[As I’ve gotten older, religion has] been more pressured on me than it was back then,” Pennington said. “[I have had] certain heated conversations [with my] parents [about them] not really being happy with how I perceive religion. It hasn’t gotten aggressive, [but] it’s obvious that they are not happy with how I see religion.”

Although identifying as atheist implies disbelief in divine intervention, scepticism is on a spectrum. There are plenty of different sub identities under the secular umbrella. 18% of American atheists believe in some kind of deity.

This ‘spiritual but not religious’ mentality is a stepping stone for some, but it’s the end result for others. Identifying with this religious middle ground, however, does not necessarily make coming out as a nonbeliever any easier.

Head’s response to these accusations is simple.

John Doe has also confronted these threats of fiery pitchforks if he fails to align with his family’s ideas. He feared saying just one curse word could cause eternal suffering.

“I didn’t believe, but I didn’t want to use [God’s] name in vain,” Doe said. “The fear of going to Hell and being in agony for eternity scared me. The thought of it still does, but eventually I realized that no matter what I do, I am just not mentally capable of being a devout Christian.”

Leaving behind these threats was one of the first steps to finding Doe’s truth. The next step was looking at religion critically.

“It doesn’t make sense to me to believe in a higher power,” Doe said. “There’s no physical evidence. [It’s] the fact that someone reads a book that they don’t know who wrote for sure and dedicate their whole life to it. I couldn’t do that.”

The thought of devoting oneself to anything, a God or not, can seem restricting. Committing her life to religion damaged Pennington’s self esteem, making her feel insignificant against the great backdrop of humanity.

“[Religion] doesn’t fill me with hope,” Pennington said. “It makes me sad [to think] we’re here because of a God and our only purpose is to serve him. It makes me feel little about myself. It doesn’t bring me joy anymore.”

What brings joy to those like Doe, Pennington and Head is a life free of religious restraints. A life where they are able to love, think and live however they may please. Regardless of if they eventually change belief systems, they remain accepting of opposing viewpoints.

“I respect every religion in every form,” Head said. “It’s just not a ‘me thing.’ If you believe in something, that’s awesome. All the power to you. I’m not going to go up to you and tell you it’s not real, because it’s real for you, and that’s awesome.”

*Subject has chosen to remain anonymous