After the confetti falls 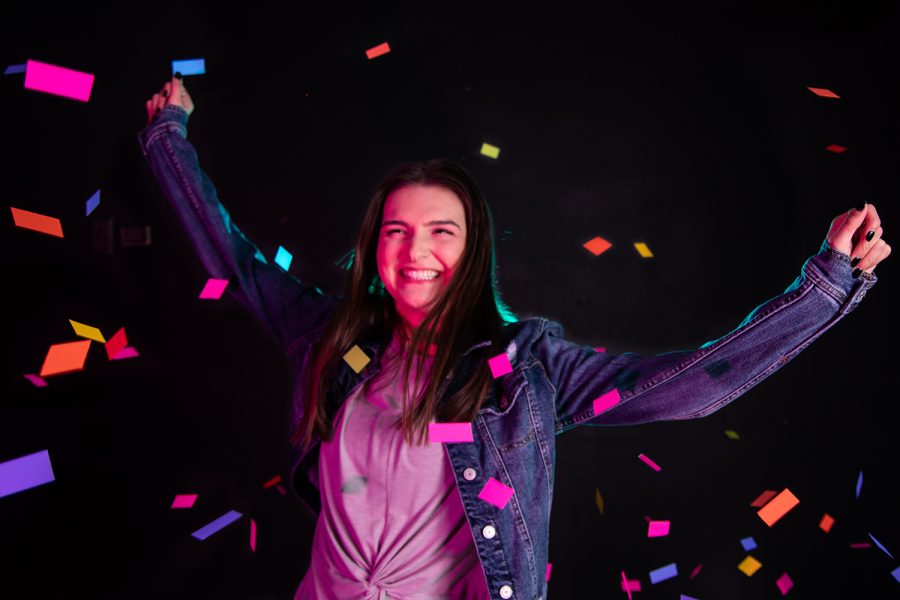 Photo Illustration. Senior Anna Grace Jones poses for a photo to seem as if she is attending a concert.

You’ve been looking forward to this concert forever, and now the pulsing music, blinding strobe lights and searing heat of a thousand dancing bodies creates the perfect cocktail of pure exhilaration. It’s sensory overload in the best way. Adrenaline pushes your feet to keep moving even when you want to collapse, and in the heat of the moment, there is pure bliss. The music you always play through your earbuds is finally live and right in front of you. In a dramatic swell of the final song, confetti explodes above the crowd.

But what do you do after the confetti falls? According to Urban Dictionary, post concert depression (PCD) is a term commonly used to describe the sense of emptiness felt after seeing your favorite artist perform live. After having the best time of your life, it’s easy to feel like the rest of your life could only go downhill from there. But believe it or not, there are ways to treat PCD.

Preserve your tickets/ memorabiliaOne of the easiest ways to cope with PCD is to memorialize every material item that reminds you of the show. The shirt you wore waiting in line to buy tickets? Now a precious artifact. Your general admission wristband? Don’t even think about throwing that away. And your ticket stubs? They might as well be your firstborn child’s sonogram because you will keep them and frame them and show them off for the rest of you life.
Look back at old photos and videosYou don’t have to mourn the past if you just stay in it! Constantly relive the best moments of your life by rewatching the shaky and low quality versions of those moments on your phone. The audio is probably more of you screaming lyrics than the actual band playing, but that just makes it more authentic.
Harass the band on social mediaBombard the artist you saw live with constant tweets of “I had fun at the show!” Comment on every one of their posts with a paragraph explaining exactly why their concert was the most historically significant event of this century. Yes, they may block you, but in some small way, doesn’t that mean they noticed you?
Write a newspaper story about your post concert depressionNo comment…
Find a support groupUse social media to link up with others who went to the same concert you did; it’s likely they are feeling just as upset and nostalgic as you are, and you can all cry together.
Post about it on your finstaAnnoy the 20 followers you have by posting selfies crying or reposting old concert videos with captions like “Missing my faves right now” and “Take me back to this day!!” They’re sure to enjoy this incessant stream of concert content, and if anyone complains, remember that some people just don’t understand how real and painful Post Concert Depression is.
Buy tickets to another concertNot the cheapest choice, but the most effective by far. There’s no better way to get over PCD than simply going to another concert. Instead of mourning past memories, start a countdown for the next time you’ll get to experience the blinding lights and deafening music, and that epic moment of confetti exploding overhead.

The key to fighting post concert depression is letting go of the past and looking towards the future. You will make other great memories, and there will be other concerts. But keep this story in mind, because once that next concert comes and goes, you’ll need this list for after the confetti falls.