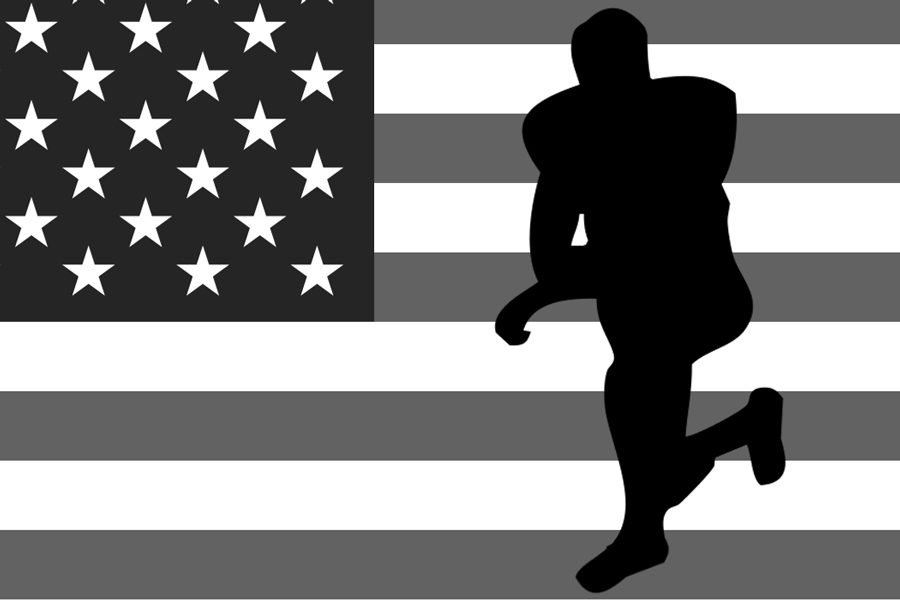 Thousands across the country turn to look at NFL players like Colin Kaepernick and Eric Reid,  lowering to one knee during the customary playing of the Star Spangled Banner instead of keeping their eyes on the flag.

These players are influencing other athletes, students and even whole marching bands with their demonstration against police brutality and the loss of pride in their country.

Though the reasoning behind the kneeling is justified, the act itself is one that resonates disrespect toward the country we all reside in. Though our country has been in wrong recently, for various reasons, it is something that has grown, and will continue to grow.”

The direct reasoning behind the kneeling was the uproar of the Black Lives Matter movement this year, along with the even more recent killing of Keith Lamont Scott, a black man in Charlotte, N.C. However, the silent protest is based on a much bigger picture–it is  based on the oppression felt toward black people and people of color for centuries.

Though the reasoning behind the kneeling is justified, the act itself is one that resonates disrespect toward the country we all reside in. Though our country has been in wrong recently, for various reasons, it is something that has grown, and will continue to grow.

When the Civil Rights Act was passed in 1964, it promised the end of discrimination on the basis of  color, sex, religion or national origin.  It was meant to get rid of the idea of oppression and set equal liberties to all, but racism is still prominent in today’s society. The lowest people in this country have exploited their position in law enforcement and taken advantage of the color of their skin and going as far as physically harming others for theirs. These people cannot take the face of the entire country.

The act of kneeling during the Anthem was originally intended to be a more respectful toward the military, rather than the dismissive act of simply sitting, but it is still a bold outcry toward the flag. The flag itself stands for the exactly what many are claiming they do not have in this country; it stands for freedom and for the millions that have died to maintain that freedom.

Currently, the United States military has deployed over 1 million troops, and each soldier risks their life each day to protect the rights of every American, of every color. Issues in our country are not equivalent to the problems that countries without the military protection we have face daily, but our problems should also not be thrown aside.

Each problem that stains our country, like the killings of every unarmed black man, are problems that we together have to overcome in a way that does not seek to diminish the respect we have fought to maintain.

Silence encompasses the audience. No one dares strain a cough. Not a single laugh escapes. All around, eyes are trained on that striped flag. But inside everyone’s conscience is a different scene. A mother sobbing over a dreaded letter. A son unknowingly taking his last look out the window of an airplane. A woman ordering demands over a body fighting for a shred of air. Minds everywhere wage battles of remembrance and sacrifice, as Americans stand in solidarity and acknowledge this bravery.

I remember being 4 years old and peering through the rows of boots and simultaneously hearing the honorable clink of dog tags. At the moment, I didn’t quite grasp the weighty significance of this, but every time I look back upon this day, my heart swells with unprecedented pride.

Americans, of all shape, size and color stood in unison for a cause that they fought for collectively. The reasons and occasion was wholly irrelevant; it didn’t matter what the issue was, Americans could overcome adversity in the face of diversity. This, in itself, I believe is a worthy cause to stand for.

Although our country’s society is ravaged by racial tensions, turning away from the one thing that keeps America free is only going to deepen the gash inflicted by social conflicts. Refusing to stand during the anthem may be a peaceful pursuit of protest, but don’t forget that those men and women who fought for your protesting rights, also fought for your freedom to act accordingly. Not acknowledging those who sacrificed their lives for you, is the most selfish act I could imagine.

Alternatively, I am not as ignorant to believe that discrimination and prejudice has been completely eradicated in our country. I am simply an American who sees the struggles of another American. There is no color. There is no gender. There is no economic barrier. Obviously, there is a problem, or there would be no riots in the streets. There would be no mention of police brutality, or claims of institutionalized racism.

Refusing to stand during the anthem may be a peaceful pursuit of protest, but don’t forget that those men and women who fought for your protesting rights, also fought for your freedom to act accordingly.”

There is an insecurity running rampant among the citizen population that expresses the inner turmoil of those who have been oppressed, and I think that as Americans, we owe it to those before us to  stop and listen. We owe it to the ones that fought the merciless battles to try to be better. To be a country that is deserving and worthy of the sacrifices that have been committed.

Abraham Lincoln stated that “America will never be destroyed from the outside.. If we lose our freedoms, it will be because we destroyed ourselves.” There is always a morsel of truth in each side to every story; this is just a tale that will have to make its course until we as Americans can come together and acknowledge that we aren’t perfect. Until we can listen with open minds and hear what is actually being felt, disorder will continue and compassion will become a rarity.

Americans of all color have fought for freedom, and it will be Americans who fight to preserve it. No political party can provide all sound reasoning and judgment. Instead, learn to look past what only the naked eye can see. Learn to feel the emotions of your heart, and follow those intuitions with every ounce of courageousness you can muster.

Even in 1863, the president believed we were one country, with one people, with one goal: freedom and equality. No percentage of opposition can steal that away from us. We are one country, that needs to learn to look past social divisions so that we can stand together as a unit, and ultimately evolve as a nation. Kneeling against the flag does nothing but further divide the people. In order to create a balance, individuals need to accept the simple utter fact that we are Americans. And that is all we will ever be.