The answer changed everything 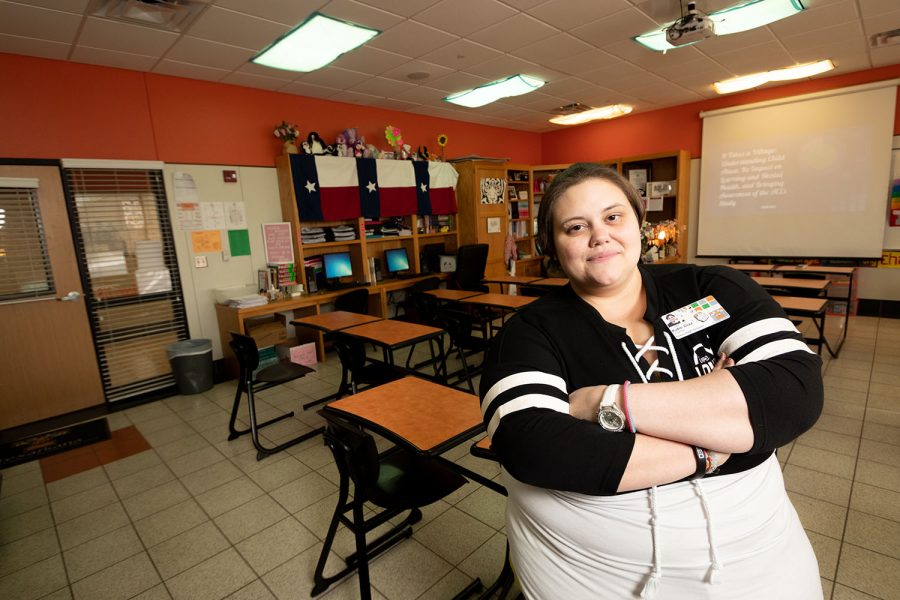 She was only a child, yet she knew what the empty bottles would cause. She knew what was happening was wrong, but she had no way of making them stop. It was their job to nurture her, but that did not seem to be their main priority. Her best option was to make sure that no one could tell something was wrong even if it was hard going through everything by herself. Little did she know that the experiences from her childhood would later impact her adulthood.

Math teacher Katie Diaz suffered many traumas during her childhood years, one of those being the extensive substance abuse of her parents. At school, Diaz seemed normal, but the story was completely different at home.

“I was very quiet, always did really well in school. I wasn’t involved in much. You wouldn’t have known that my parents had an abuse problem with alcohol,” Diaz said. “My parents did everything they thought was right for me. They were there to give me food and shelter, but kids need a lot more. Kids need nurturing. I was always overweight as a child and that was something I was criticized on a lot at home. I think that’s why on the school end of it everything seemed fine because I was striving to at least do that right.”

As an adult, Diaz was diagnosed with cancer multiple times. Her doctors were unable to provide answers for her condition, so Diaz did research of her own. Diaz came across the Adverse Childhood Experiences (ACEs) study, which helped her seek closure.

“I had to start chemo, and I was mad because I didn’t know why this was happening. I had genetic testing done to see if it was hereditary. It wasn’t anything. There was no explanation to why I had the cancers that I had. I was mad for quite a long time, especially after the third cancer. The third cancer took my ability to have children of my own,” Diaz said. “That’s why I wanted to spread the news about the ACEs test.”

When I found out about the ACEs study, it was a relief to think that I wasn’t crazy. It provided answers to questions that I had for a long time.”

The ACEs study asks questions about one’s childhood and the traumas that one may have experienced. Through this test, Diaz learned that her parents’ substance abuse was a component of her infertility.

“ACEs stands for Adverse Childhood Experiences, but it isn’t really well known from what I’ve witnessed. It’s basically a test to see what childhood experiences could have effects on you later in life. They ask questions about anything traumatizing that happened to you, like being raped as a child, things like that,” Diaz said. “You don’t have to go into detail about what’s going on; it’s just yes or no and then the scoring. Their statistics are based on your score.”

Although the test provides statistics and details about what may happen in the future or what effects the past has had, it is not always guaranteed. In Diaz’s case, following in the footsteps of her parents was something she could control but the health effects were not.

“When I was younger, since I was around [substance abuse], it made me not want to do it,” Diaz said. “I’ve broken out of the statistics for that part.”

When Diaz took the ACEs test, she scored an eight, a high score.

“I felt guilty. I felt at fault for being sick, and my husband was stuck with somebody who couldn’t give him another child,” Diaz said. “A lot of weight was lifted off of me when I found out about ACEs. It gives  reassurance that a lot of things aren’t in your control. I believe that I’ve been taken care of, and by the grace of God, I’m still here.”

The ACEs exam not only provides an explanation for the score received, but outlets and the right support for the individual as well. Diaz views this exam as an opportunity for counselors and teachers to further help students understand and cope with their situation.

“This test helps a lot for counselors in schools if they are aware of this test. They can relate that information back to teachers, parents and understand the effects that a kid can have. Later, when a child can understand what the score means, they can understand that they’re not defined by what happened to them,” Diaz said. “Even though there are statistics out there, there’s also answers and support groups. When you talk about somebody talking to a therapist or psychiatrist, a lot of people think that that person is crazy, but it’s not that. Some people really need that to be able to work through those problems. It’s OK to talk about what’s happened to them, it’s OK to work through that with somebody else.”

Diaz takes advantage of the knowledge she has gained from the exam and her life experiences to make sure that her students can trust and feel comfortable to speak out, whether that be with her or any other adult.

“When you walk in the room, we know your name, we know your ID, we know what kind of classes you had the year before, but we don’t know anything about what you’ve been through,” Diaz said. “I personally try to get to know all my kiddos as much as I can.”

Diaz said her door is always open for students to come talk.

All it takes is that one person that knows what you’re going through to understand and help you through it.”

“If you have at least one person, even in that traumatic childhood, that you can go to, your chances of of having problems later on go down,” Diaz said. “All it takes is that one person that knows what you’re going through to understand and help you through it.”

Diaz encourages any student who may be going through a hardship to speak up and accept help because even the smallest piece of advice or a single suggestion can change the direction of a person’s future.

“Like I said, for a student like me, you never would have known [anything was wrong] because I didn’t come out and say it,” Diaz said. “So if you have a teacher that reaches out to you, take them seriously. It can be your parents, your teachers, or any other adult in your life. I’ve learned here at Texas High, so many teachers would do anything for their kiddos, and I’m one of them. I love my kiddos so much.”

Through difficult times, Diaz reflects back on one of her favorite memories to surpass feelings of anxiety and hopelessness. She keeps in mind that even though she had it rough growing up, she’s still here and getting better each day.

“Last summer, we took a trip to Mexico. We [visited] a beach down there. This was after I’d finished chemo in December, and I was starting to get my strength back. I was starting to get a pretty good length of hair back to where I wasn’t completely bald. I felt like my body was recuperating from being torn apart from the inside out,” Diaz said. “I kind of walked off from my family and went down to the water and just stood there and looked across the ocean. I let the tide come in as my feet sunk into the sand. The waves were crashing up and the wind was blowing, and it was a moment where I felt peace. I had made it through one of the most difficult times, and I was still alive.”