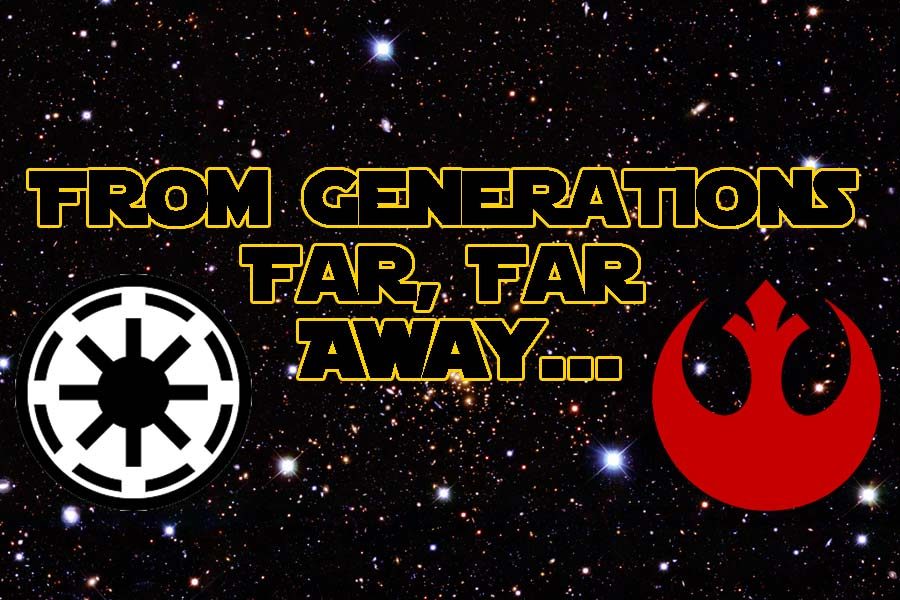 In 2005, “Revenge of the Sith” completed the puzzle of the Star Wars saga. Now, 10 years later, the adventure continues with Disney’s “Star Wars VII: The Force Awakens.” “The Force Awakens” takes place 30 years after the Galactic Empire is defeated, however the galaxy is not safe. A new villain, Kylo Ren, must be defeated by the Jedi and their allies to ensure peace and safety to all the inhabitants of the galaxy.

Obi-Wan Kenobi and his apprentice, Anakin Skywalker, continue their investigation into the Trade Federation. Anakin develops forbidden feelings for Padmé, and a Sith Lord begins to orchestrate his attempt to rule the galaxy.

The Clone Wars are nearing an end, but Anakin is struggling between good and evil. He is worried about losing Padmé in childbirth, and the evil Darth Sidious is making his final plan to forge a Galactic Empire.

The young Luke Skywalker and mentor Obi-Wan Kenobi set out with the resistance movement to rescue Princess Leia from the grips of Darth Vader aboard the Death Star- which just so happens to be capable of eliminating entire planets.

The Rebels continue to flee from the Empire and Darth Vader. Luke Skywalker travels to Dagobah to train with Jedi Master Yoda, and Han Solo and Princess Leia continue in their flight from the Empire’s clutches. Vader wants to capture Luke and reveal stunning information about his family.

Darth Vader and the Emperor are building a new Death Star, and Luke Skywalker has become a Jedi Knight. Luke rescues Han Solo and the Rebels prepare their attack to finally rid the galaxy of the Dark Side of the Force.

New Star Wars movie will connect fans across a generation, add to storyline

Rebel fighters stand amidst a bonfire, celebrating the defeat of the Empire. Luke Skywalker smiles as he watches his father become a ghost of the Force. Han Solo and Princess Leia join in the celebration of a new era.

This scene from George Lucas’ 1983 film is the closing of the Star Wars saga under his direction. In December of 2015, Disney will continue the series with the seventh installment, “The Force Awakens,” and fans are excited to see what the new storyline will entail.

“I’m excited that a new director is making it, so we can see the movie from a different perspective, and the new characters look really interesting,” senior Rachel Lewis said. “I think the new movie will have different tones and moods. The graphics and Common Gateway Interface will be really interesting.”

Photography teacher Clint Smith was just a young boy when the first movies were released and says that George Lucas set the bar high for movie graphics.

“The very first movie I ever saw in movie theaters was “The Empire Strikes Back”, so that set the bar pretty high for what I expected from a movie because all of the films produced for Star Wars were groundbreaking with their effects,” Smith said. “Industrial Light and Magic was created specifically for the first Star Wars film because there were no special effects houses. George Lucas owned ILM, and it has grown to be the biggest special effects studio in Hollywood.”

While most fans are excited about the new and updated graphics, some are wary about Disney’s drastic plot changes and deviation from the original movies. Some Star Wars books have involved an expanded universe that have not coincided with the movies.

“I’m nervous that they will change it up and not follow the same format as the other movies because it has been a while since the latest one was released,” sophomore Jillian Ross said. “I love Disney movies. I feel like they are trying really hard to keep it in sync with the books.”

Chemistry and Physics teacher Marvin Harris says the younger generation of Star Wars fans are missing out on the continuity of the series when they go see the latest movie if they do not catch up on the first movies.

“The graphics blew me away in 1980 with the original,” Harris said. “I could not get enough. They were so innovative and original. I can’t wait to see the new one in December.”

Science teacher Amy Baker-Kireev also says she remembers when the “Phantom of Menace” movie was released in 1999.

“All three movies in the original trilogy came out before I was born, but I do remember when Star Wars Episode I came out,” Kireev said. “I was in eighth grade. I remember waiting in line at the movie theater and seeing several people in line wearing costumes.”

Most die-hard fans of the older generation grew up with the originals and watched as the Star Wars story unfolded. Action figures, toys, movies and TV series evolved from the original movies and have become an integral part of the culture.

“Star Wars is basically as old as I am. It was the first movie I ever saw, and I grew up watching them,” Smith said. “As I became an adult, they were re-released and the prequels came out, so the backstory was told.”

Since the original six movies were produced by George Lucas, senior Kip Williams is worried that Disney will have free reign to change the basic plot line of the stories

“I’m nervous because I don’t know if it will be good or bad and [Disney] is going to do things that I won’t like and that aren’t supposed to happen,” Williams said. “They can do whatever they want, but I don’t want it to be too extreme or something that doesn’t fit.”

Sophomore Will Norton, however, says that Disney will be able to expand upon George Lucas’ groundbreaking work and is excited to see how Disney takes the new movie past “The Return of the Jedi.”

“There is a lot of expanded universe stuff– like fan fiction stuff– and George Lucas has never taken it past the sixth movie. I’m curious to see where [Disney] takes it; there is a lot of speculation, which is what makes it exciting,” Norton said. “What really happens on the screen is what I’m most excited to see. [Star Wars] was the first movie saga that I got into. But Disney is going to expand the Star Wars galaxy.”