'A Quiet Place' shocks and awes viewers with lack of dialogue

‘A Quiet Place’ earns its place 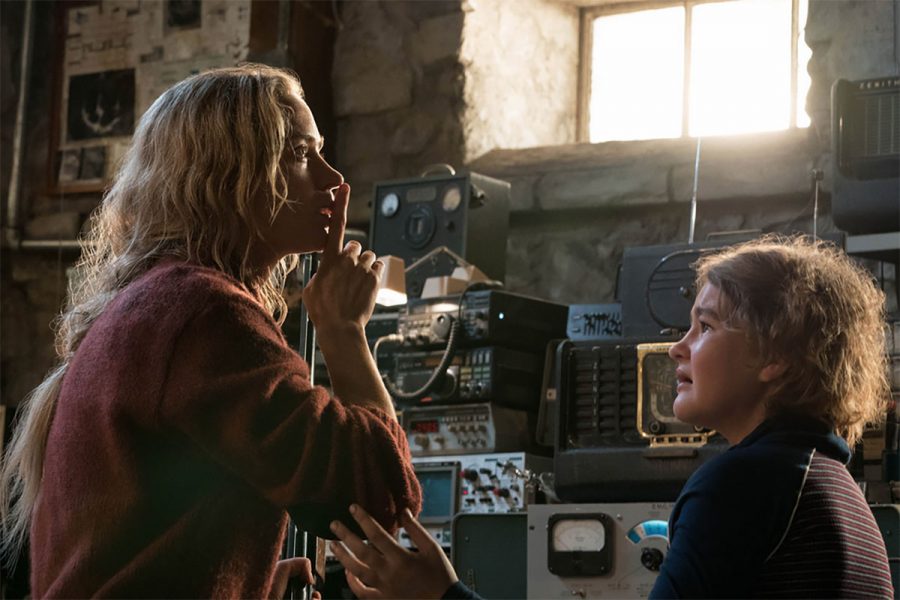 “If they hear you, they hurt you…”

Only being released on April 9 and its 95 percent of Rotten Tomatoes rating, “A Quiet Place” has ranked its number one spot in movie lists. The movie has a box office review of $132 million total domestically.

“A Quiet Place” has not even been released into theatres for an entire month and has a run time of ninety minutes. It has become the most entertaining movie of 2018 so far, as well as having an actual couple star as a married couple in the movie, giving it a family feel.

“It was suspenseful because [the movie] almost had no sound,” sophomore Madaline Criddle said. “It had me sitting on the edge of my seat, and I was just waiting for something to happen. I enjoyed how the father showed his dedication to his family in the film.”

As Criddle explains, the movie is completely silent most of the time. This silence creates uncertainty, making the hairs on the back of your neck stand up.

“I really enjoyed it, it was very captivating and well made,” junior Cameron Maynard said. “It had an excellent cast which helped me get into it. The lack of knowledge on the monsters helped because it made you do the same as the main characters, which is try to figure out how to kill all of the creatures.”

Maynard believes the silence made the movie more interesting to watch and to get into. This horror movie with it’s special twist makes you want something to happen unlike other movies.

“I’m so used to thriller genre movies being loud and this was something new,” Maynard said. “It was so quiet, the background music helped build the suspense and everytime I heard a noise, I would get more and more anxious.”

The main purpose of the movie was to keep the theatre silent so everyone could stay in tune with the movie. The creators wanted to scare people with the use of mind play. With the logic of horror movies, you can tell something is going to happen anytime the movie grows quiet.

As stated by Adam Epstein’s review on the movie, “At a packed screening of the horror movie “A Quiet Place” in Manhattan last week, you could have quite literally heard a pin drop. You could hear the person behind you breathing (or trying not to). You could hear the silence.”

The movie tricks the brain, making the viewers not wanting to breathe so they don’t create any stress. “A Quiet Place” is almost like watching a movie with a person drowning or losing their breath underwater.

“A Quiet Place” did well considering that it was one of the newest movies that reached the top of the movie charts by complete silence. The movie keeps you focused and wants to give you an unrecognized feeling. Just like the characters, the movie makes you hold your breath, so you feel like you’re traveling alongside the cast.

When one goes to see a horror movie, they never expect to be awed. Screams and laughter seem to be the response elicited by most modern thrillers, and while some may bring tears, the chances that the film actually touches its audience is rare. Gore, jumpscares and a hastily put together storyline with shallow characters are the typical hallmarks of the genre, but “A Quiet Place” blows the norm out of the water.

The uniqueness of “A Quiet Place” is in its near-silence. While the movie has dialogue, it is minimal, and this forces the viewer to focus all their attention on the screen. The movie tells the story of a family surviving through an invasion of monsters that hunt by sound. The mother of the family is pregnant, and the main conflict of the film is the family’s struggle to have the baby quietly and keep the baby quiet after it’s born. However, many complications make this process extremely difficult.

One of the best aspects of this movie is how realistic the family dynamics are. The family, even though they are living through an apocalypse, still have arguments and strained relationships, something rarely represented in horror movies. But in “A Quiet Place,” each character has a personality and their own motivations, which made the story more unpredictable and intriguing.

The cast of “A Quiet Place” is also unique. John Krasinski, formerly Jim on the comedy show “The Office,” has a reputable group of fans, and this boosted the popularity of the movie as a whole. But, Krasinski didn’t just appear in the movie— He directed it. It was amazing to watch this beloved actor go on to expand past acting and be so involved in a movie. Anyone who enjoyed “The Office” would love “A Quiet Place” even just if they watch it to see Krasinski’s work.

Krasinski isn’t the only star. Emily Blunt co-stars alongside Krasinski. Blunt is known for her roles in movies such as “The Devil Wears Prada” and the “Girl on the Train,” so her presence in this movie just amplifies the star-power and talent in the film. Also, Blunt and Krasinski are married in real life, which makes their marriage in the movie so much more heartfelt and genuine, and brings a realism to the film that otherwise may not have existed.

An actor without the disability their character has will never act as genuinely as an actor with it.”

However, out of the whole cast, perhaps the most notable actor is Millicent Simmonds. Simmonds is a deaf American actress, and she plays a deaf character in the film. Besides being incredibly talented, Simmonds brings a representation to the movie that is truly unusual in the horror movie. While many horror movies might have referenced disabilities before, they are rarely portrayed by people with those disabilities. For example, the 2016 horror movie “Don’t Breathe” starred a blind man played by Stephen Lang. Lang isn’t blind, so the representation of his character isn’t entirely accurate, and more than that, it is not as genuine. An actor without the disability their character has will never act as genuinely as an actor with it.

Millicent Simmonds’ casting in the movie was no mistake. John Krasinski personally pushed for her participation in the movie, which marks a crucial turning point for the inclusion of diverse characters in movies. Simmonds taught the entire cast American Sign Language, which is another breakthrough in Hollywood. ASL representation is scarce in media and the fact that ASL is used correctly, and even seen as an advantage to the characters, is phenomenal.

“A Quiet Place” is an emotionally harrowing experience, but a good one. When a movie makes you cry, it shows that it made a connection with it’s audience. It becomes art, not just entertainment. It’s guaranteed that this near-silent movie will be the talk of the town, and every theatre it plays in will be a quiet place.