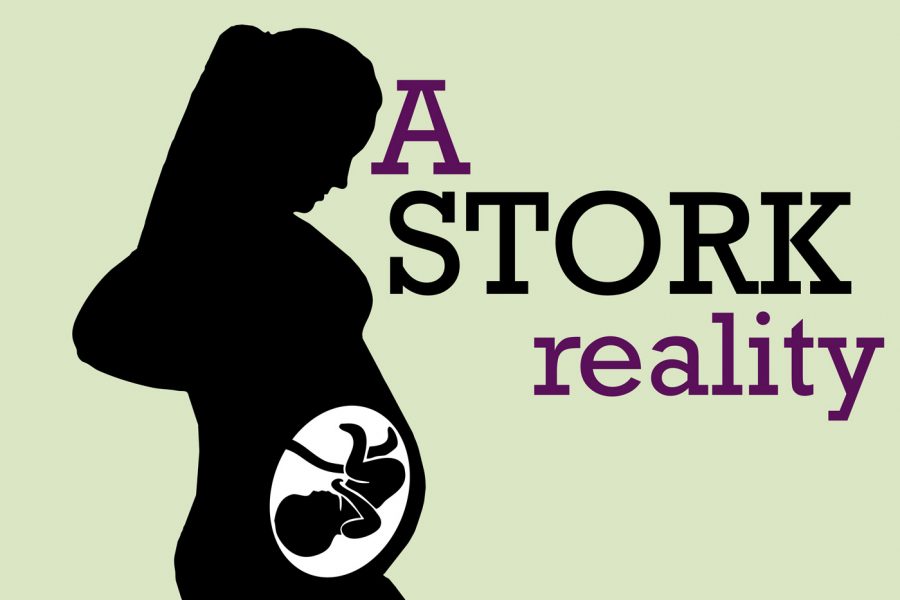 Dealing with the unexpected

They ignore the flutters in their stomach, the little hints of movement that leave them nauseated and miserable. They lean on cold ceramic tiles and tell themselves that it’s just a bug, that it’ll pass.

But the thing is, it won’t. And for the next nine months, those girls–the same ones who, before this happened, wanted nothing more than to turn 16, 17, 18, to experience high school with friends–will be forced to confront a world they haven’t been prepared for with any amount of schooling. About 77 percent of teen pregnancies occurred “too soon,” according to a national survey of adolescents. When a pregnancy comes unplanned in the middle of high school, teenagers are forced to make the most important choice they may ever make.

I may have lost some of my freedom, but I’ve gained a happiness. I want to go home after school and I want to be with her.”

Junior Olivia Parks sits in the hospital waiting room, staring at the white tile floor. She dreads the news to come. It’s impossible, right? She can’t be pregnant.

“My mom was the one who told me we were going to the doctor,” Parks said. “When they measured my stomach and ran tests, I found out I was 37 weeks pregnant.”

A typical pregnancy lasts for approximately 40 weeks, so there was little time left until it was time to deliver the baby. After two weeks, doctors induced a state of labor because of pre-eclampsia, a condition that gave Parks an abnormally high blood pressure.

“I could only come to school for 30 minutes to take a test,” Parks said, “or otherwise I’d start seizing on the way to another class because of how high [my blood pressure] was.”

In these few weeks, Parks was given a difficult task: to decide whether or not she was going to keep and raise her child.

“I just thought, ‘Did I want normal for her? Did I want her to have a mom in school her whole childhood, or give her two parents that would worship her?’” Parks said. “It just tore me up thinking about not getting to watch her walk.”

There were many things to consider while weighing her options. She had to figure out her future plans, whether or not she was ready to be a mother and how much she would have to sacrifice for everyone to be happy.

“Don’t be embarrassed to have a kid,” Parks said. “Once you decide that you’re willing to give up the time it takes to raise your child, you should show [him/her] off.”

Ultimately, Parks decided to keep the child, but is now faced with the challenge of raising her daughter alone.

“The dad of my kid didn’t care, and he wasn’t there for me even though I cared about him,” Parks said. “If you decide to keep your child, don’t factor in the dad. He can leave, and you can’t.”

Parks now plans to finish high school, and is looking into colleges– such as Southern Arkansas University– that provide dorms for students raising children. She is enjoying her time with her 3 month-old daughter, and hopes to have a successful life with her.

“I mean, it was my choice to keep her. Now I just have to keep my grades up and become something so she’ll have a good life,” Parks said. “I may have lost some of my freedom, but I’ve gained a happiness. I want to go home after school and I want to be with her.”

His face lights up as he tells the group about his daughter. “Oh, yeah. Her name’s Aubree Mechelle.” She’s a year old, and he gushes about her every chance he gets.

Junior Kaveone Ragland has been a father for over a year, and he has developed his relationship with her as much as he can.

“When I first found out, [my girlfriend] told me, but I didn’t believe her,” Ragland said. “She went to the hospital one day with her mom and texted me during class, and that’s when I realized it was real.”

For the duration of the pregnancy, Ragland wanted to support his girlfriend and their child. He attended doctor’s appointments and spent time preparing for the birth of his daughter.

Once his girlfriend went into labor, Ragland spent two nights with her in the hospital to support her and assist in the process. It was of the utmost importance to him to be present at the birth, so he rarely left her side.

Since Ragland played such a large role in his girlfriend’s pregnancy and the birth, he experiences an unconditional love for his daughter that has changed the way he lives.

After the birth of his child, Ragland has devoted much of his time and dedication to raising her. He knows that not a lot of teen dads take responsibility for their children, but he is determined to make her a part of his life.

“Oh, [my life] changed a lot. She’s my motivation; she motivated me harder. You know, I go out and play sports for her,” Ragland said. “It’s only hard when you can’t get her crying under control, and that’s just because she wants her momma.”

Despite the challenges it has posed, Ragland plans to be an active part of his daughter’s life and help his girlfriend raise her. He encourages all other teen fathers to do the same.

“Don’t leave them. Be there through the labor. Try to stay in the room the whole time,” Ragland said. “You got her pregnant, so you should stay in the room, watch the baby come out. Hold her hand. Do everything.”

Her clothes don’t fit. People stare in the hallways. She can hear their whispers: “Is that girl pregnant, or just fat?” 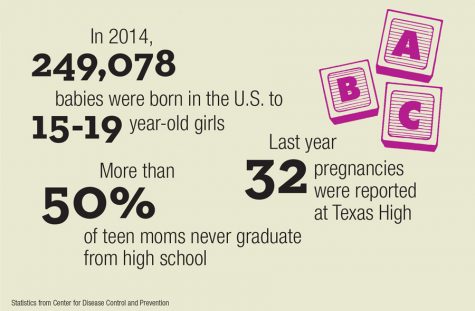 Senior Jordyn Zymbroy gave birth to Nathan in May 2016.

“I was considering an abortion at first,” Zymbroy said. “I freaked out because I didn’t know how I was going to tell my mom. That’s what happens with a lot of teenagers, I think.”

After visiting First Choice Pregnancy Center, Zymbroy decided that adoption was the best choice for herself and her child.

“I chose adoption for my child because I wanted him to have a better life than I could give him right now,” Zymbroy said, “and I wanted to be a part of his life even if I couldn’t provide for him.”

Zymbroy worked with the Christian adoption center called Bethany, an organization based in Little Rock. With this organization, she was able to meet with a coordinator once a week to choose the adoptive parents.

“In the end, I had about 100 sets of parents to choose between,” Zymbroy said. “There was one couple that was pretty normal, but there was something that kept drawing me back to them–I feel like it was God showing them to me. The first time I met them, I knew they were the ones.”

Zymbroy has developed a strong relationship with his adoptive parents. She sees him at least twice a week, the family often attends football games and he will know that she is his mother from the early stages of his childhood.

“It’s like having a bigger family than just my own,” Zymbroy said. “Instead of just having my mom, I have the adoptive parents and my son, so it’s really cool.”

Based on the choices she made and the resulting relationship she has built with the adoptive family, Zymbroy recommends the same course of action for anyone who is unable to keep their child.

“If it comes down to being pregnant, don’t think there’s only one option,” Zymbroy said, “and know you don’t have to get an abortion. You’ll regret it. I think every day about what would have happened if I had, and all the questions that would have been unanswered: was it a boy or a girl, what would he/she look like. There are options out there for you.”