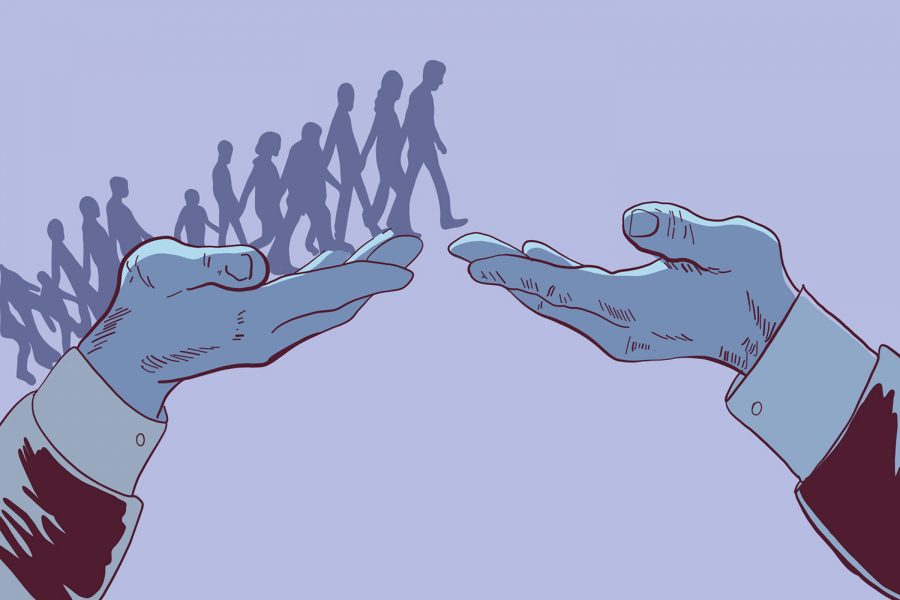 A threat. Not a plan. Not a block. Not a wall. A threat that sends millions of families into dismay. The idea of deportation, loss of citizenship, or separation of family are implications that would shake any person to the core, but for so many who reside on United States land, this is the reality, this is the fear.

Since the beginning of President Donald Trump’s campaign in 2015, immigration has become a top grossing political topic and increasingly controversial as it climbs. He aimed to restrict illegal immigration through executive orders and the proposed wall along the southern border, and has kept this as a key topic during his term. This sparks tension between opposing parties and has opened the door for a new conversation regarding immigration.

“An executive order is a way the president can get around Congress and be able to say, ‘I have the authority to do this thing. I don’t need congressional approval to do it. So I’m putting the order in place,’” AP United States History teacher Chuck Zach said. “When somebody is unhappy with the order and wants to challenge it, they can take it to court and say he doesn’t have the authority to do that, or his order in some way, violates the Constitution.”

In October, Trump announced his proposal of an executive order to essentially deny birthright citizenship to people born in the United States but of illegal parents. Some view this as undermining the 14th Amendment of the Constitution. Section One of this amendment ensures citizenship to “all persons born or naturalized in the United States and subject to the jurisdiction thereof.”

“Well, migrants or immigrants have certain push and pull factors that either force them to leave their homeland or attract them to a new place,” United States History teacher Lance Kyles said. “Being a citizen with all the rights included in United States citizenship is a pull factor that would attract people to come and try to have a child here. [Trump] wants to remove that reward [by passing the executive order].”

The argument for this order is that the children of illegal immigrants should not be granted citizenship because they are not born of parents legally under the jurisdiction of the United States.

Due to the fact there is no law that specifically entitled anchor babies to citizenship, it is feasible for Trump to pass the executive order.”

“The 14th Amendment goes under the premise of somebody that’s born in the United States or naturalized as a citizen automatically,” Zach said. “The president is looking at it and saying, ‘Well, [immigrant parents] came into the country illegally, so if the parents came in illegally, and the [children] were then born in the United States to parents of illegal immigrants, that doesn’t give them legal citizenship.’ That’s the way he’s looking at it.”

If Trump’s executive order is passed, it is safe to assume that it will be challenged in Supreme Court on the grounds that it goes against the Constitution. The judicial branch has jurisdiction over constitutional interpretation, so the proposition of this order taking power from the Supreme Court will likely spark tensions.

“The Supreme Court is the law of the land. Those are the nine most powerful people in the United States of America because when people ask, ‘What does this law mean?’ It means what they say it means,” AP Government teacher Hunter Davis said. “There are a lot of court cases that have built precedents long after the constitution that incorporated that concept of citizenship into the 14th Amendment [by the Supreme Court].”

This is not the first instance where Trump has threatened to pass an executive order to discourage illegal immigration. In Jan. 2017, he issued one to block funding of sanctuary cities. His denying of these cities’ federal funding was the result of their refusal to cooperate with U.S. Immigration and Customs Enforcement (ICE) officers. This order was challenged by District Judge William H. Orrick of San Francisco, California, in February of that year. It was later permanently blocked.

“A law takes huge acts of legislation to be overturned, and with an executive order, all a judge has to do is say, ‘No, that’s not constitutional,’” Davis said. “They’re so volatile. [Trump] has absolutely no power whatsoever to really, truly make them stand.”

This is also not the first instance in which birthright citizenship has been questioned. In the late 1800s after the passing of the Chinese Exclusion Act which barred Chinese laborers from emigrating to the U.S., immigrants from Asia used the courts system to protect themselves. The Supreme Court ruled that those born within the boundaries of the United States had rights to citizenship that could not be dismissed. This decision validated birthright citizenship in a scenario that mirrors that of this nation.

“This is not the first time this has been challenged,” Zach said. “During another time of mass immigration into the United States, there was a discussion about making sure the 14th Amendment didn’t protect people who were having children illegally in this country.”

Whether Trump’s executive order comes to pass or is just another fleeting comment by the president, it has once again highlighted the pressing issue that is immigration.”

Technically, an executive order is not a law, meaning it is weakened in its degree of enforcement. The order cannot receive federal funding. In most cases, executive orders are used to urge Congress into making decisions on laws/issues that have yet to be decided on.

“The president usually issues an executive order in place of legislation that they feel is not getting passed by Congress, and it’s kind of a bully move to try to push Congress into passing it,” Davis said. “It’s like a last ditch effort by a president to try to push Congress into creating some piece of legislation they think should be immediately addressed, but it’s not as dictatorial as people make it sound. Executive orders have very little power of enforcement.”

The proposal of this executive order can be viewed as a claim with more bark than bite. In any circumstance, it has spurred fear and concern for illegal immigrants and their anchor babies. The topic of immigration, legal and illegal, is one that has been discussed and argued for generations without an enduring solution. Whether Trump’s executive order comes to pass or is just another fleeting comment by the president, it has once again highlighted the pressing issue that is immigration.

“We failed to implement policies or create policies that would fix this problem long before. With 30-plus million undocumented immigrants in the United States of America, those people are in limbo for two reasons,” Davis said. “By now, they should have created a system of legality, but they keep putting Band-Aids over the issue. Then you have these knee-jerk reactions, like you’re having now, where people think of these simplistic policies to solve gigantic complex problems.”