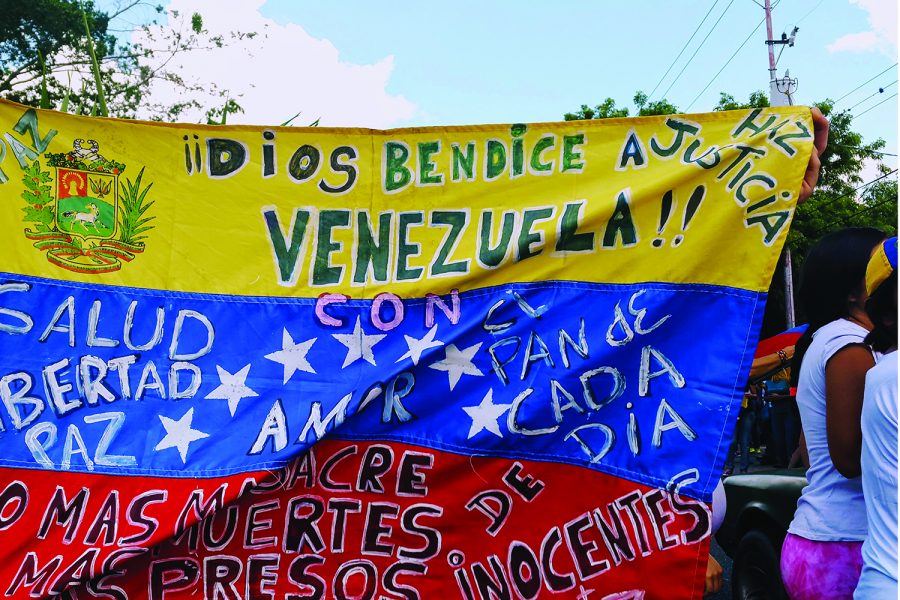 People in the streets protest for peace and liberty from an oppressive government in Venezuela. The country has faced an economic crisis and rampant inflation, leaving many of its citizens in poverty.

One family in the midst of a failing nation. Owners of the English Academy, Centro ISI, yet they’re as equally impoverished as everyone else. Starvation is a word known too well by many. Limiting rations of food is normal for their family, and hunger is something they face each day. Outside their home, outbursts of chaos and havoc keep them alert throughout the day. At any given moment, they can be robbed, kidnapped, even murdered. They have to do something to save their family.

Venezuela has been plagued by hyperinflation, lack of food, power cuts and lack of medicine. This has led many to flee the country, and seniors Santiago and Samuel Silva are no exception.

After Nicolas Maduro won the special election of 2013, riots and military intervention created a violent environment for Venezuelan citizens. The truth is that Venezuela is one of many nations under these conditions. Resilient individuals and families everywhere search for ways to escape hardships for a better future.

“They came into the government saying that they were ‘socialist,’ and then they turned into a communist government. In a socialist government, the goal is to make everyone equal right? They accomplished that, but everyone should have enough money,” Samuel said. “Instead, they made us all poor. The government is basically a dictatorship because all the powers converge into the president, which is Nicolas Maduro.”

Under the leadership of Maduro and a corrupt government, it has been difficult for residents of the country to obtain the basic necessities.”

Venezuelans are suffering great costs and are barely managing. The average Venezuelan lost 19 pounds, and 50 percent of Venezuelans lived in poverty.

“We are an oil rich country, but all the money that the country makes is taken by the government, and we’re left without money. We do not earn enough in order to buy food, and everything is expensive due to the inflation,” Samuel said. “Getting food is difficult for everyone, from the richest to the poorest. It’s a struggle to get medicine as well. We were doing what was necessary in order to survive.”

Venezuela’s economic crisis began under the leadership of President Hugo Chavez in 2010 and has continued to worsen and collapse over time. With the exchange of the Venezuelan monetary system, buying something as simple as a chicken could take a whole month with the average Venezuelan pay.

“They changed the currency in Venezuela; now it is Sovereign Bolivar. For example, 5 million Bolivars would equal $1 in the United States, so people could work for a whole month and gain 300,000 Bolivars which wouldn’t even equal half the amount of a full dollar,” Santiago said. “People would travel to Columbia, which is right beside Venezuela, to buy Colombian money because Venezuelan money doesn’t work.”

Money is not the only problem. Food markets and stores are usually completely empty, containing only a scarce number of items. Even if families somehow obtain enough money to purchase a meal, there is no guarantee that they will come across one.

“There’s nothing in the supermarkets, absolutely nothing. Sometimes you’ll find pasta, rice, and very rarely, will you find meat. There’s no variety. It’s always the same. There’s water, but no refreshments,” Samuel said. “There were foods that were expired, so it was really difficult finding food that wouldn’t make us sick. It was very dangerous to get sick in Venezuela because there is very little medical help.”

The lack of food, medicine and constant violence within the nation and abundance of impoverished individuals led many Venezuelans to take to the streets and protest.

“The last time that there were protests was in 2017. It started because we could not take it anymore. People were slowly getting fed up with it until the country exploded. Everyone came out to protest. Of course when the people start protesting, the government gets scared because they can overthrow them, so they sent the military to kill us,” Samuel said. “The protests were practically a war between the military and the protesters — them with guns and us with whatever we can find.”

Violence does not only take place in the streets, but within the homes and workspaces of average Venezuelans. For the Silva family, many instances of danger and violence occurred on a daily basis.

Although they left behind their country and family, they still hope and pray for the recovery of Venezuela and its people.”

“The government and the protestors would always shoot  in front of our house and release gas bombs. There was a lot of robbery and burglary,” Santiago said. “I remember one time I was at my dad’s institution doing homework, and when I looked up, these men had come in with guns taking everything that we owned.”

Because of these recurring events, the Silva family decided to take action to save their family. Not everyone has the same ease immigrating to the United States and consider themselves blessed.

“It’s a huge relief to be here. Just recently, three states in Venezuela lost power for 10 hours and my friend wrote to me about it. He said there wasn’t any electricity, that everything was a disaster, and he wanted to leave,” Santiago said. “I feel blessed that my parents were able to save us. Although I do miss a lot of things, I have to see the brighter side. The friends and family that one leaves is very difficult, but I have faith that things will get better and that we can go back someday.”