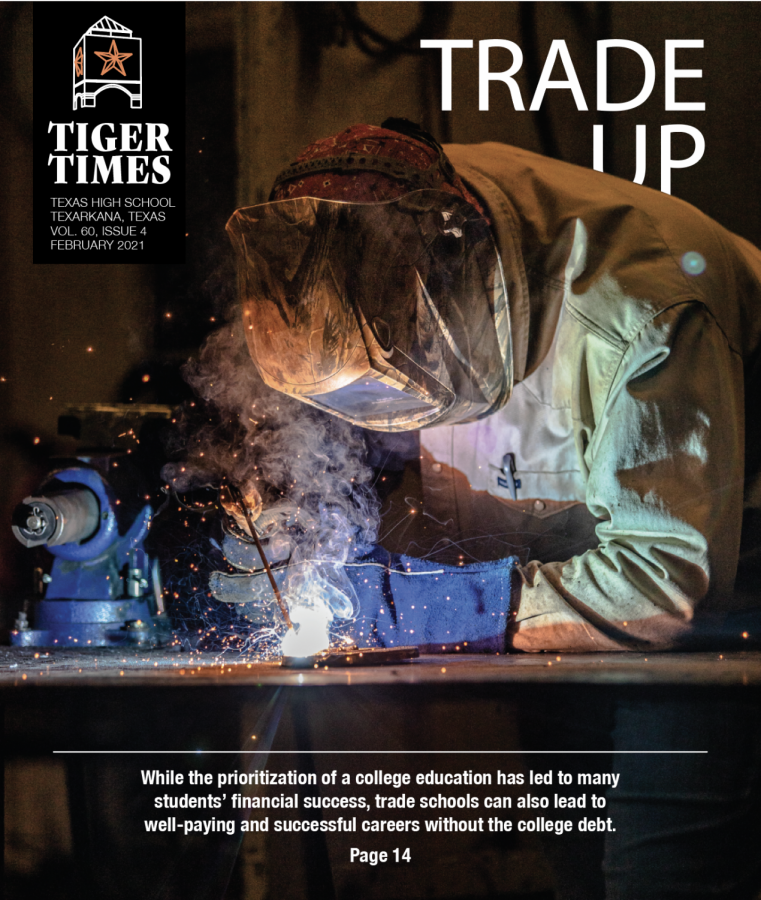 From the second students walked onto the beckoning high school campus for the first time, the idea of “college” was immediately ingrained into their minds. Adults waste no time to ensure their expectations for the younger generations are enforced. For some students, college is a dream that they’ve been preparing for nonstop. However, to others, college may be merely an idea that holds no definite bridge to success.

While the heavy prioritization of college education has led to many student’s financial success, a large portion of high school students fail to realize that they can be promised the same success without enrolling in college after they graduate.

For 2020 graduate Spencer Reed, the training he received while in high school gave him an advantage at his current job.

“At Texas High School, I was taking automotive classes through Texarkana College, which helped me around my current job,” said Reed, who works as a technician for McLarty Ford Quick Lane. “If you want to be better prepared, I suggest enrolling in those automotive classes as well as doing a bit of research at home. If books aren’t your thing in school, I definitely think trade school is the way to go.”

When students are in high school, there’s numerous jobs that are not only well paying, but they also come with valuable experience that can lead to long-term employment after graduation. The only issue in today’s society is that there’s a lack of qualified teenagers to fill the needed positions.

“In my business, you have to be able to work with tools and drive trucks, and quite frankly, most kids don’t want to even drive a stick shift nowadays. Some don’t even get a driver’s license at all,” said Ernest Pender, president of Pender Water Wells. “Historically, kids grew up working on the farm where they learned how to use tools and how to innovate, so they were better prepared to work for someone like me.”

Pender said the lack of students entering trade careers is a serious problem in his industry and many other trades.

“The education system has pre-programmed everyone to think they have to have a four-year degree, go to college somewhere and get a 9-5 job. The fact is that there’s such a shortage of people who could move into the trades,” Pender said. “The trades are paying quite well nowadays. In fact, you’ll find a lot of people working in the trades that have a high school education, and they’re making more than a lot of people with a college education.”

If financial stability is something a person desires to have, going down the trade school route may have just what they’re looking for. Two of the courses offered here through Southern Arkansas University, Aircraft Airframe Technology and Aircraft Power Plant Technology, allow students to prepare for a stable life-long career in mechanics that requires nothing more than a license rather than college.

“Within probably five to 10 years, every one of our mechanics is making $100,000 plus a year. And within 15 to 20 years, they’re making $100 an hour,” Aircraft Technology teacher Aaron Flowers said.

“This isn’t a dying trade, but it’s been a long time since we’ve had a lot of new, fresh mechanics off the line. A lot of the guys that are in the industry have been here for 30 to 40 years, so they’re starting to retire. Back before Sept. 11, Aircraft Mechanics surpassed nursing for the No. 1 most needed job in the world, so we’re up in the top five.”

Colleges offer a variety of majors, some proving to be more useful than others. It’s not uncommon for a first-year graduate to find themselves majoring in something irrelevant to their future career due to the uncertainty of the path they want to go down.

“We get this idea that people who are in college are the most important members of our society, and everybody else who isn’t one of those people are just a byproduct of laziness,” government teacher Hunter Davis said. “I always tell my students, ‘Imagine what your life would be like if your trash man did not show up twice a week.’”

Davis also believes that education systems should be doing more to decrease the stigma surrounding not going to college.

In order to enhance the popularity of these courses, administrators and teachers have worked to pinpoint what their next step is in regard to the promotion of these courses. Within the past few years, classes relating to trade school vocations now offer dual credit classes like welding, cosmetology, construction and automotive technologies.

“There are many different pathways that lead students to different places,” Assistant Principal Bettie Lynn Stark said. “We do tours in all these different areas from air conditioning, professional driving, welding, computer networking, a lot of these are dual credit classes that we offer here on our campus. These are jobs that are paying great money and benefits, right here in Texarkana.”

After dropping out of college not once, but twice, Texarkana College agriculture professor Kevin Burns soon realized that his calling in life was beyond the school system that was lined with standardized testing and high expectations. Burns craved a program he could have more control over in order to pave his way to success.

“It finally hit me that I liked helping people, so a vocational [agriculture] teacher is what I became,” Burns said. “That allowed me to get students to focus on trades. These kids did everything from construction, plumbing, electrical work, mechanics and welding.”

Not only can college be the wrong path for many students for career trajectory or monetary reasons, it may also be a stressful environment that doesn’t fit the student’s way of learning.

“I’ve had more students that were interested in the hands-on [experiences] because some students, and I’m one of them, get test anxiety,” senior Hayden Harrell said. “I know how to do it but I get so discombobulated that I can’t function fast enough to do it, but if you leave me alone, I can fix whatever you need. I can do whatever you need.”

A majority of high school students have yet to determine what their future looks like after high school. While some students may be prioritizing the perfection of their ACT score to get accepted into the college of their dreams, others can directly fast forward to the working field thanks to the benefits of trade school.

“If you want to work with your hands, then go to a trade school,” Harrell said. “For me, welding is a hobby, but it’s also something to fall back on. There’s a lot of open spots to be a welder — you’re always going to have to have somebody to climb up on a roof, weld and fix stuff up.”

Matters of the heart