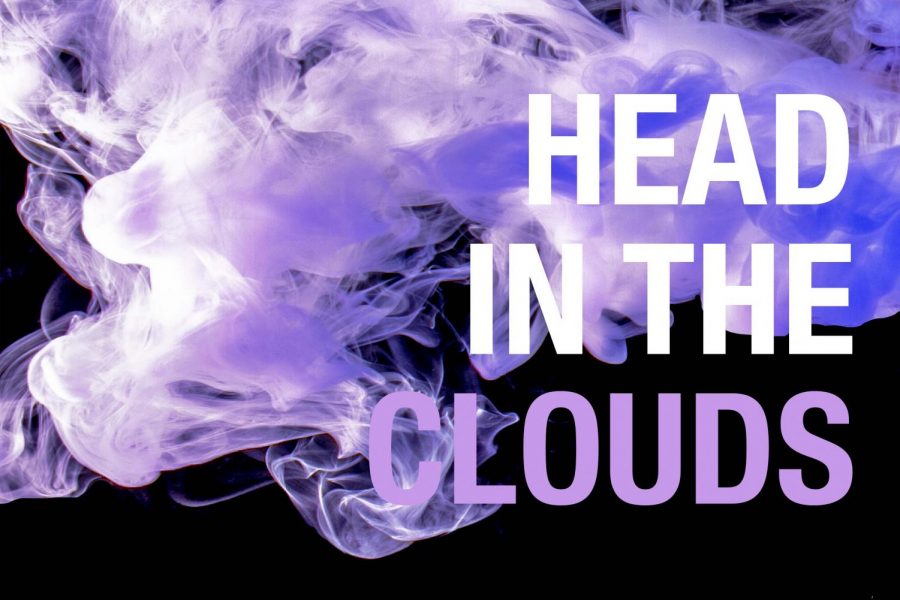 Head in the clouds

Vaping is the sensation taking the world by storm. Its popularity as a recreational device is increasing, though originally intended to be medicinal. Many questions remain hidden inside the smoke. 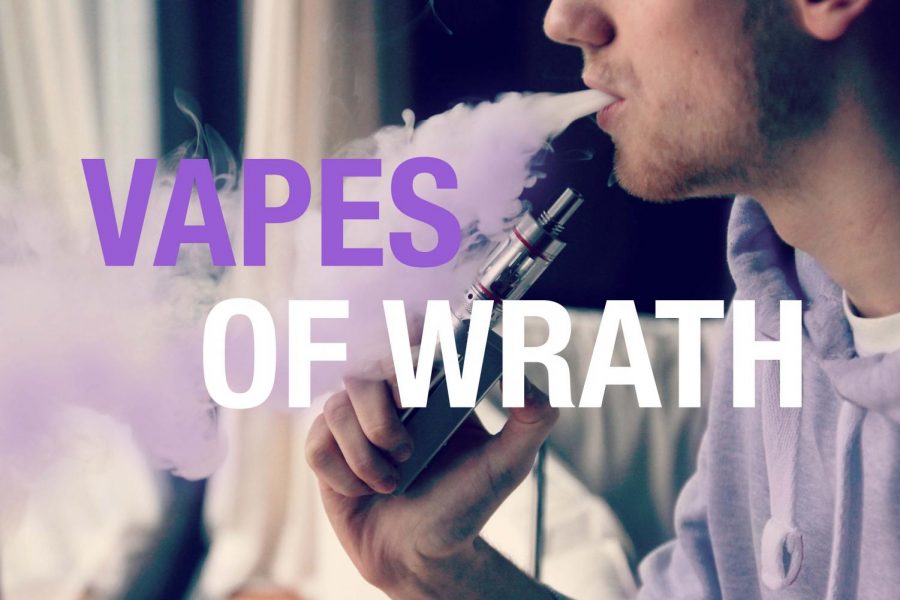 You huff. And you puff. And you blow a fat cloud. But unlike asthma, there is no medicine for vaping.

Ever since Americans realized the consequences of smoking cigarettes, the tobacco industry has developed various methods to replace nicotine in the cessation, or halting, of smoking. Nicotine patches, nicotine gum and in recent years, vaping, or the usage of e-cigarettes, have allowed former ex-smokers to gradually wean off of their addiction to nicotine.

“The original purpose for e-cigarettes and vapes was to kick the habit of smoking and [decrease use] of traditional cigarettes, which have over 35 carcinogens in them,” pulmonary doctor Christopher Bailey said. “This way, they could use the vapes as a nicotine substitute to principally administer nicotine with an optional flavoring element.”

However, as youth culture continues to be defined and redefined in America, vaping has infiltrated the lives of millions of young people ever since it was considered trendy by popular culture icons. Vaping for non smokers has been shown to act as a gateway to smoking.

“It has become the hip thing to do,” Bailey said. “It is a way to fit in with the rest of [one’s] peers, and lots of teenagers who were not smokers to begin with start to vape. In fact, over 50 percent of young folks who vape will begin to smoke cigarettes within a few years.”

Despite the original intent of e-cigarettes to assist smokers to quit their habit, the nicotine in vapes has proven addictive enough to attract new users.

“There’s a lot of originally developed [solutions] for helping with smoking cessation, and it’s mostly in the young folks,” Bailey said. “They’re abusing vapes because they don’t see it as harmful. The vapes have been more deceptive than any other nicotine product.”

Health hazards increase with the utilization of methods to strengthen the ‘high’ from vapes, such as cancer risk, increased cardiovascular disease, increased risk for smoking, and stroke risk for smokers.”

As the user becomes more addicted to nicotine in the vape, they seek out more by vaping through a particular method. Dripping, a process in which users drop vape liquid directly onto the heating coil,  allows them to produce a thicker, more flavorful smoke.

“The big problem, though, is that even though it doesn’t have all the carcinogens traditional with the cigarette, there are some of the devices and some of the methods by which people abuse the vape,” Bailey said. “There’s a process called dripping, and it actually concentrates more nicotine per puff when they manipulate the e-cigarette.”

Even though nicotine is highly addictive, it is only one of many chemicals that is addicting and commonly abused or used.

“There’s so many things that we’re exposed to that have that same potential character [of addictiveness], so it’s not the product,” Bailey said. “It is like demonizing coffee. It’s nicotine smeared with a stimulant, and it’s a highly addictive stimulant.”

The addictive and habitual desires caused by nicotine from vapes can also be stimulated through the hand to mouth use of the cigarette to simulate a traditional cigarette. The potential drawbacks from this “hand to mouth” syndrome are weight gain and vaping after smoking.

“Part of the problem with many smokers is that when they do try to quit, individuals can end up gaining tremendous amounts of weight,” Bailey said. “Instead of having the hand to mouth function of the cigarette, they take up the fork instead. Due to the fact that their taste buds function better when they quit smoking, food tastes better.”

Furthermore, vapes cause long-term health effects, such as increasing the risk of cancer and cardiovascular diseases.

“Even though there is a low carcinogenic rate with e-cigarettes, a vape’s height net carcinogenic potential would increase by abusing this drip technique,” Bailey said. “As far as if it’s safer from a cancer perspective, if you use [a vape] the way it was originally designed, it is actually lessened considerably. However, you increase your risk for exposure to those aldehydes and the risk for carcinogenic potential [when dripping].”

Even without dripping, e-cigarettes have long-term health consequences.

“Health hazards increase with the utilization of methods to strengthen the ‘high’ from vapes, such as cancer risk, increased cardiovascular disease, increased risk for smoking, and stroke risk for smokers,” Bailey said. “As a society, we hope to reduce risk for cancer, and vapes appear to be doing the opposite.”

Critics have accused e-cigarettes of being a gateway to drugs, but this is not necessarily the case.

“I do not believe in a ‘gateway drug’ because any use of a drug always has the potential to establish habituation,” Bailey said. “It’s how the person who’s using the drug looks at it. ”

Despite the high risks, little is being done to expose the dangers of vaping.

“It’s a matter of personal choice. There needs to be more education on the risks involved with vaping at a young age and vaping for the wrong reasons,” Bailey said. “But, there’s no campaign right now to really pursue that. If you look at the federal government, they’re not spending any money to educate young people about vaping very much.” 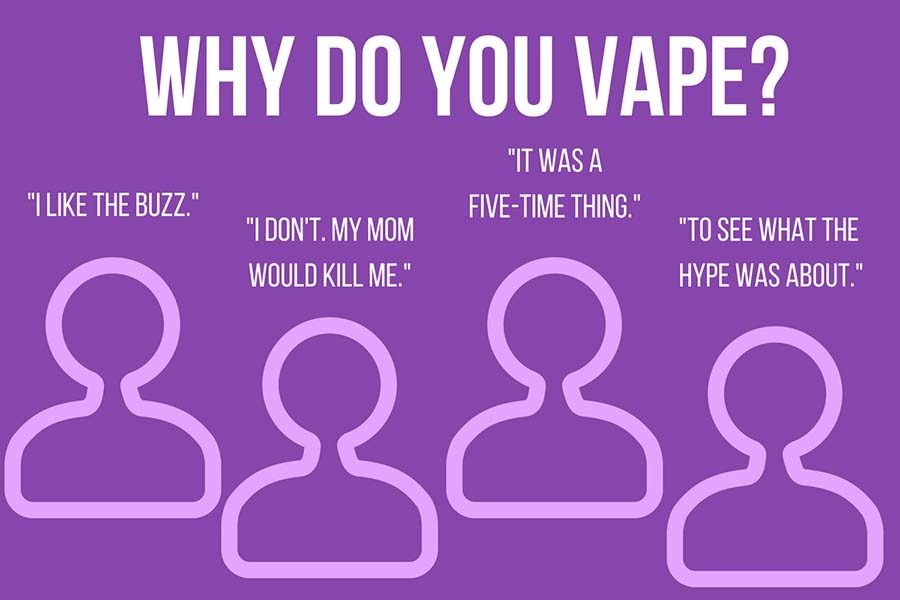 Everything the teacher says is a blur. Each second passes as the teacher turns around to wipe away the equation on the board. Time is at an apparent standstill.

This is it— the perfect opportunity.

The student slips a thin, metallic object out of the backpack lying on the floor and puts the device up to his mouth. The button is pressed with a single motion of his thumb. Inhale. Hold. Exhale. There’s only one focus, one objective for the student: don’t get caught.

Vaping, which is not directly referenced in our student handbook, has opened up new territory when it comes to disciplinary action.”

Vaporizers, vape pens and e-cigarettes (popularly known as vapes) have made a recent comeback and are continuing to grow in popularity, especially among teenagers. Vapes are rising in use, once again becoming a source of controversy.

“There has been an increase of vaping at Texas High. In my classes, that’s all you hear about,” junior Daisy Rosas* said. “They’re either talking about the kind of vape they have or getting students to vape in class while the teachers aren’t watching. They sometimes vape in the bathroom.”

Vapes were originally developed to aid smokers who were addicted to cigarettes, but teens are now using them for other purposes. According to the National Institute of Drug Abuse, manufacturers don’t have to report e-cig ingredients, so users don’t know what’s in them. Most teenagers say it’s just flavoring, about a fourth don’t know, and the rest either put nicotine or marijuana in them.

“My first exposure to vaping was seeing my parents do it when they were quitting cigarettes,” junior Reece Jones* said. “I know that vaping can cause popcorn lungs and possibly a nicotine addiction.”

Their ability to produce interesting smoke effects while being easily concealed and generating the pleasure of a buzz have prompted more students to hop on the bandwagon.

“I tried vaping because I wanted to learn how to do the cool tricks that some professional vapers do,” senior Jose Lopez* said. “When I first started vaping, I thought it was cool because of the amount of smoke you could exhale.”

Unlike cigarettes, the health risks of vaping are not as studied, publicized or well known, which leads to many misconceptions and has increased the number of students who participate in this activity.

“As far as I know, vaping doesn’t have the major effect that smoking does of causing lung or any other type of cancer, but that definitively doesn’t mean that there are no negative effects,” sophomore Cameron James* said. “An addiction is an addiction, whether it is directly harmful or not, so I think that there are still possible consequences that need to be explored.”

Although vapes can’t be purchased as a minor, students have found loopholes to this law, whether it’s getting it from a friend, a parent or from online. The quest for this fix has not been hindered.

“I ordered my vape on eBay, which doesn’t have strict checks over age, and used my debit card,” freshman Jake Patrick* said. “They simply just drop off the package if no one is home, so it was easy for me to get my order while my parents were at work.”

Vaping, which is not directly referenced in our student handbook, has opened up new territory when it comes to disciplinary action. Vapes have caused a misunderstanding between administration and students in terms of consequences.

“They gave me ISS. I have to take all my semester exams, and I couldn’t go to prom,” senior Seth Carson* said. “I wish I hadn’t done it at school, but I think they were excessive with my consequences.”

Administration is determined to crack down on vaping. The age restriction for vaping is 18, which makes any kind of consumption a legal offense. Vaping will be presented with the same consequences as tobacco and marijuana.

“We’ve made it tougher on discipline,” Principal Brad Bailey said. “We would advise teachers to be aware and address any students vaping by reporting them to administration. With the advances in the technology, it’s harder for us to identify some of the devices they are using to vape. However, a puff of smoke or scent is a strong indication of someone vaping. I think we can do a better job of educating our staff on what vaping is and what to look for.  Also, it’s important to let everyone know of the consequences of vaping and how it is not allowed at school.”