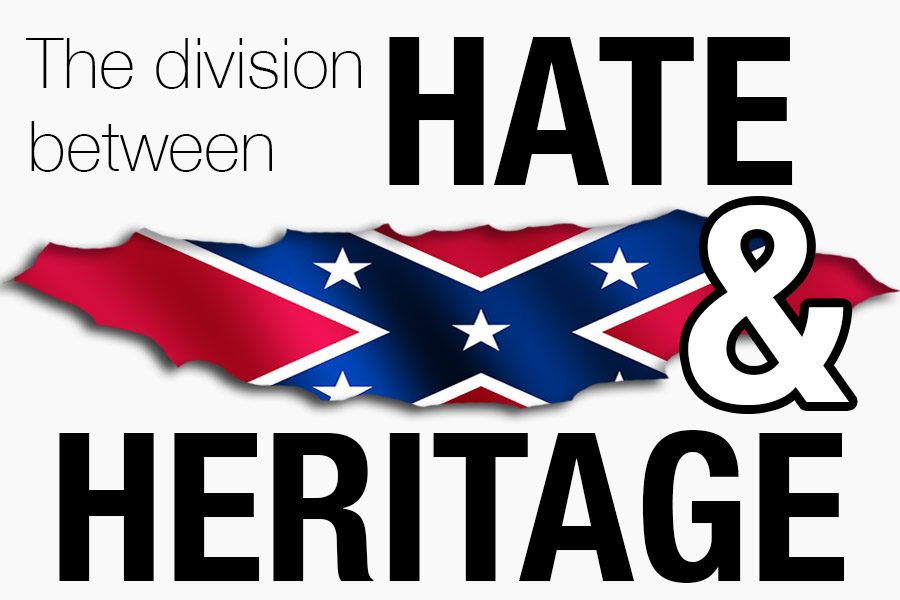 The division between hate and heritage

A symbol of the past or a trademark of racism? In the South, the widespread controversy that surrounds the Confederate flag is becoming intense. These viewpoints represent the two sides of the issue.

It’s time to change pain caused by the past

Recent events have sparked a debate over the ethical dilemma of the Confederate Flag. Federal buildings have lowered it from their flagpoles, Dukes of Hazzard was taken off TV Land for its references to the flag and Amazon has stopped selling products that bear its image. Some say it’s a symbol of racism, while others vehemently deny it.

For generations, many Southerners have been clinging to the rebel flag. For the especially avid, this includes its prominent display on virtually any surface where it will fit. It flies from truck beds, gets tacked to walls, is sold on T-shirts in gas stations and is transformed into bumper stickers that will remain until the colors turn pink and baby blue.

The main argument in support of the rebel flag is “heritage, not hate.” Yet I fail to see how the flag doesn’t represent a time of racial hatred.

Let’s look at the facts. According to The Gilder Lehrman Institute of American History, Africans were kidnapped from their homes, enslaved and transported to America; about 12 percent died in the voyage. Thousands died during the period of adjustment to the unfamiliar American climate. Half of the slave children born in America died during their first year of life. And millions people from later generations died of disease, malnutrition, exhaustion, injury and any other form of mistreatment. We’ll never know how many African Americans actually died while in slavery, because there was no registry for deaths of people considered property.

Slavery is considered an unfortunate blemish in the history of the country because the majority of Americans would never admit to the fact that their country was an active participant in an atrocity of this magnitude. But because of human nature  and our inability to take responsibility for wrongdoing, we have decided that even if we uphold the symbol of the people who committed that atrocity, we are in no way connected to them.

Another argument cites our First Amendment rights, saying that we have freedom of speech that allows us to display any flag we want. Yes, you’re right–we’re allowed to say whatever we want as long as we don’t threaten someone’s life. And I’m not saying that the Confederate flag should be illegal, I’m just saying that the First Amendment shouldn’t be cited as a reason for you to be mean. Because, after all, racism and its symbols are pretty mean concepts.

Other arguments go back to the origin of the war itself: supporters say that the Civil War was a battle over states rights, not slavery. While some deep, philosophical reasoning can shape this argument into something that makes a little sense, it entirely disregards everything that we are taught in history class. The Missouri Compromise, the Fugitive Slave Act, the Abolitionist Movement and any other cause of the war revolved around one thing: slavery.

And the controversy over states rights was created by the issue of slavery–the Southern states were terrified of prospect of losing their slaves to a government order, so they campaigned for their right to property and for their states’ rights to nullify federal laws.

You can talk about tariffs and states rights all you want, but those issues would never have erupted into full scale war: the South Carolina Nullification Crisis was resolved amicably enough, and we didn’t worry about nullification again until it had to do with slavery. The “states rights” philosophy may hold some truth, but it would never have been an issue if slavery didn’t exist.

The remaining argument: “stop being so offended, it’s not a big deal.” But for some, it’s definitely a big deal; while you display your heritage and belief in states rights, you display a symbol of one of the greatest transgressions in American history. Our generation is the one with the ability to change things, and nothing will ever be changed if we stay silent about injustice. It’s our job to create a world that doesn’t determine worth on the basis of skin color; one that decides to own up to its mistakes and develop a zero-tolerance policy toward injustice and hate.

Symbol of past doesn’t mean bigotry

This symbol of Southern pride was once flown during the era of slavery, but many miss the keywords, “was once.” The symbol now supports constitutional freedoms that many Southerners love and fear will be taken away by the government “up north.”

Our government seems so distant and far removed from our lives, and any time freedoms are threatened people are reminded of a distant tyranny, only this time an ocean does not separate the divide.

Southerners pride themselves in hunting, fishing, owning guns, protecting their families, Southern food and country music. Granted, you do not have to be from or live in the South to experience and enjoy these freedoms.

The Confederate flag is misrepresented. It does not mean Southerners support slavery. It means we pride ourselves in being from the South where Southern hospitality is appreciated, religion is honored and respected and where sweet tea is the drink supremacy. Southerners fly the red, white and blue because we are loyal to our country but we also fly “those other” colors because it is a symbol of heritage and pride of where we were born and raised.

High school and college graduates pride themselves on where they attended school much like people who grow up in the South pride themselves in growing up in this region of the United States.

So when this stigma of being a bigot forms just because a simple flag is flown, supporters of the Confederate flag get angry and do not want it to be taken away simply because others don’t understand its true meaning. Flags symbolize heritage, pride and geography the same way a country’s famous landmarks do.

A flag does not mean we want the old days back. A flag means I appreciate where I grew up and call home, and I do not want to see this simple symbol of my heritage torn from my life, such as Walmart and Amazon refusing to sell any Confederate flags. That seems a little too much like a tyrant ordering me to not express myself.

In a world where expression is applauded, shouldn’t it be okay for me to express my Southern heritage?