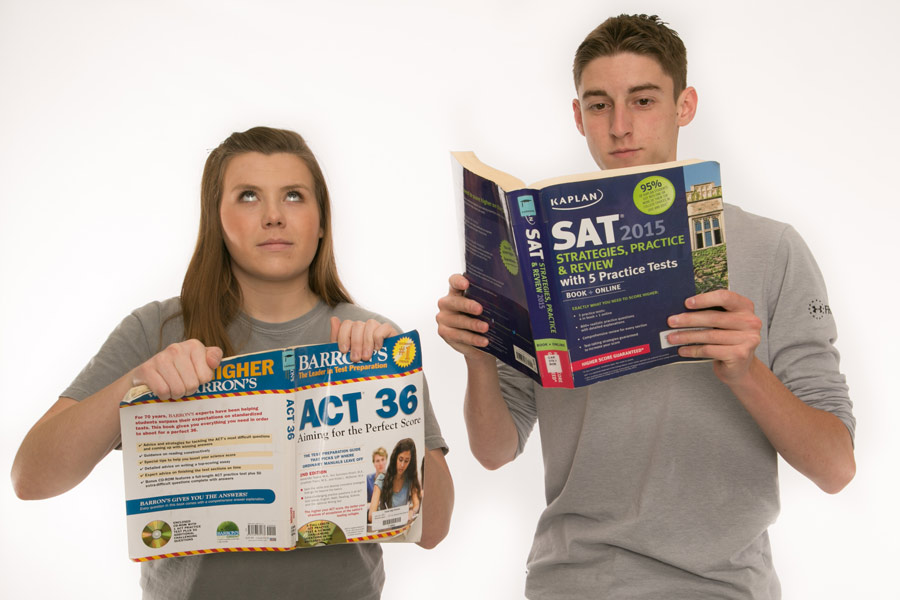 Standardized tests can provide an opportunity for colleges to measure students’ academic ability, but many believe the testing format is unfair and that intelligence can’t be standardized. Students that have experienced standardized tests firsthand give their input.

Countless hours of studying, college level high school courses, College Board workbooks and pamphlets; everything students are driven to do in high school outside of the regular curriculum is for one goal: college admission.

While community service, a diversified resume, and upbeat personality certainly make for a great college admissions candidate, without a proficient score on the ACT or SAT, college acceptance is not likely, placing a vast amount of emphasis on excelling at one or both of these tests.

To some, this may seem ridiculous that such acclaimed institutions of higher learning use a standardized test as a large part of what they base their acceptance off of because it burdens students with additional studying for a test that will carry little weight in the profession they may choose to pursue.

However, the value of these tests does not lie in their raw material.

These preliminary tests evaluate a student college readiness and ability to pass a college course. They test for competency.

The idea behind this is that a competent student can be a successful adult. These tests teach students how to work under pressure and deal with time constraints like they will undoubtedly have to do in their future professions. Quick decision making, strategic time management, and comprehensive analysis are really the standards used to determine college readiness, not subject matter expertise.

Learning the material and extracurricular studying are not required, nor are they necessarily necessary to succeed on the test. Additional preparation will enhance subject matter knowledge and may increase test scores to an extent, but it will not produce any of the skills listed above.

High scores reflect the development of these skills. The importance of advanced scores on the tests, and the incentive to work to raise scores higher stems from the scholarship opportunities that become increasingly available as a student’s score improves.

Scholarships that set certain grade standards for these tests to be awarded typically allocate partial of full coverage of a student’s college expenses, making earning one of them a sought after and competitive venture.

This system that incentivizes students to go above and beyond to work to achieve a better score should not be viewed as egregiously rigorous or unnecessarily extra.

Teaching our young adults that it is necessary to strive to surpass the minimum requirements is a hallmark of higher education, and an important proponent of learning to be competitive in today’s job market. No business wants to hire an employee who only does the bare minimum. They want someone who will seek to do their best all of the time in the interests of bettering the company they work for.

Without these tests, the standards of college acceptance would be drastically changed, and the overachiever attitude that makes the American economy successful would no longer be actively encouraged at a national level in education.

4.0 GPA. All AP classes. Five to six hours of homework a night. Weekends and all free time spent volunteering. For some reason, America has decided that the weight and time spent on all of these factors combined pales in comparison to the much dreaded ACT and SAT.

Students file into classrooms after having their ID checked and await stressful testing and bubbling in answers. When they get their scores back, experience an array of different emotions; they hold the belief that their ACT or SAT score dictates which college they will go to and potentially their future.

Why does the United States place such significance on a single test taken for four to six hours on a Saturday morning, rather than the days, months and years spent in a classroom and at home doing rigorous work? It is understandable that the College Board wants all students to be admitted into college equally, and it thinks a required standardized test is the right way to do it, but this is wrong.

Rather than admitting a student based on their ability to cheat a test, (and by this, it is understood that “cheating a test” means learning the tips and tricks of how to take the ACT or SAT in a short amount of time, as anyone who has taken these tests realizes that this is the “easiest” way to improve his/her score) colleges should look to the student’s transcript, extracurricular activities and letters of recommendations- the factors that make a student well-rounded. This way, universities can look at the grades, values and personality of the student. After all, these characteristics encompass what the student has been cultivating for years, since childhood.

Additionally, taking the ACT and SAT costs money- up to $60 each time, not including late registration or other miscellaneous fees. While the College Board wants equality for all students, this is a blatant violation of that policy, as it favors the more economically fortunate. Thus, this leads to students with more funds being able to take the test more times than those who don’t have extra money, allowing those with money to improve their score through practice. While there are fee waivers, there are many requirements to receive them, and not all those who need waivers can obtain them. Also, students with more wealth have the ability to purchase ACT/SAT help books, which advertise the “helpful tips and tricks to improve your score.”

While many claim that the ACT and SAT tests the college-readiness of a student, this is simply not true. How is answering 40 multiple choice questions in 35 minutes on a reading test preparing a student for college? Or writing an essay in 40 minutes (which is not a college concept at all, as college papers usually take weeks)? How is buying a book that actively advertises the ways to “cheat” these tests getting one ready for college? The answers to all of these is no, the standardized tests required by most colleges do nothing to prepare students for university work.

Other critics assert that having a standardized test disregards unfair schooling, such as one school being much more rigorous than the other, and puts students on an even playing field. However, if a college looks at the transcript of a student, it can get a tentative idea of how a student performs and how seriously they take school based on his or her grades, eliminating the need for such standardized tests.

Because of these various factors, some colleges have started to turn away from the SAT and ACT, including many liberal arts colleges, who don’t even require a student to submit these scores when they apply. Instead, such schools seek well-rounded students, or those semi-strong to strong in every subject rather than strong in a few and weak in many. Moreover, these universities ask for more letters of recommendation and extracurricular activities, showing that the character and hard work of a student is important in addition to grades.

If more universities started seeking out students based on the amount of work they put in everyday rather than four to five hours on a Saturday, they can turn the American school system away from unnecessary testing and towards more in-depth qualifications for admission into university.