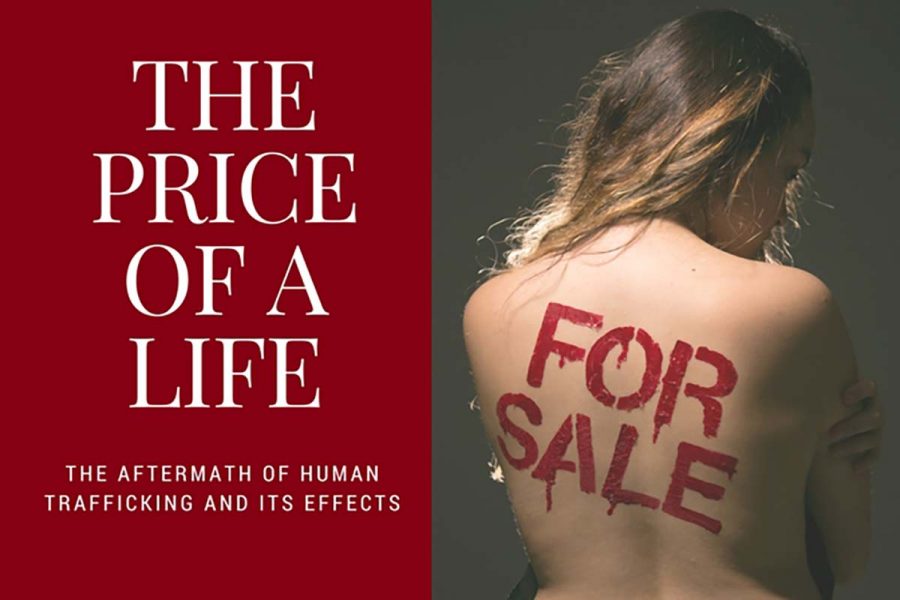 The price of a life

She sits in the shadows, an understood label plastered across her back. For sale. Not just her body, but her life —her soul. She is reduced to being nothing more than a commodity, to stay in the shadows and remain silent. This is the only life she knows. 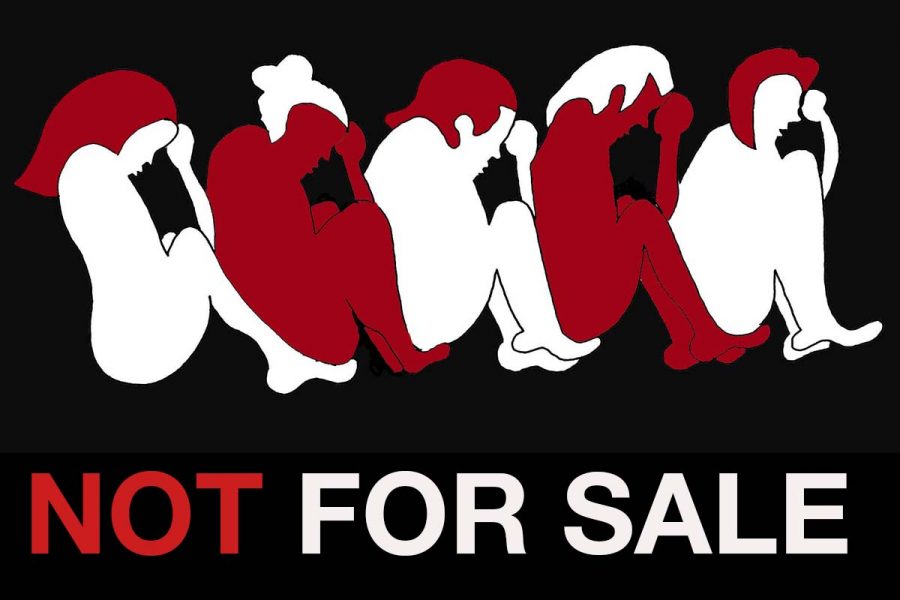 Selling a human is an idea that people believe died when slavery ended, and yet, there are still people with price tags under the radar, circulating in a system of human trafficking.

But it’s not just a problem happening in foreign countries far from here, it is prevalent in the city of Texarkana.

“Texarkana is a hotspot for human trafficking because Interstate 30, Interstate 35 and Highway 59 run through this area. These large interstates are easy for traffickers to drive through when covering a large area range,” said Kim Bateman-Neff, Domestic Violence and Sexual Assault Advocate. “These areas are also in high demand of construction workers. Many workers are forced into labor so that a trafficker can receive the money.”

According to Texarkana Today, Kenneth Nelson was arrested in October 2017 after an eight-month investigation in the trafficking of five people in Texarkana, which could mean life in prison for him.

“This particular case involved some local 15-16 year old girls whom Nelson is alleged to have coerced into having sex with him in exchange for drugs,” Public Information Officer Shawn Vaughn said. “The trafficking charges were based upon the fact that he transported them to his house. Those allegations came to light after the children told an adult of the abuse.”

People do not take into consideration how close to home the issue is and how easily it is to get wrapped up in one of these toxic situations.

“Social media is a huge pathway to becoming a victim. A common method of trafficking is ‘boyfriending’ a victim which is when someone on social media poses as an innocent person and starts flirting with people,” Bateman-Neff said. “Usually the victim begins to open up more to them. The next time the victim is feeling insecure they run to social media or meet up with the guy. This leads to sexual abuse and trafficking.”

Traffickers target those who may feel misunderstood by others. The victims find themselves cornered, feeling as if they have no other place to turn to once they are trapped in the situation.

“These predators go to great extremes to convince the young person that their friends and family do not understand them and that only they can provide the love and respect that they crave,” Vaughn said. “Unfortunately, when the teen does take the step of leaving home, that is not the reality they find.  They are thrown into a life where they are dependent upon the adult for everything and forced to become involved in prostitution and drug abuse just to survive.”

If someone is sucked into the cycle of trafficking and sexual abuse, it is rare that they can escape it, but even if they do make it out of this labyrinth of horrors, the psychological impact cannot be erased.

“The main effects from human trafficking are post-traumatic stress disorder, sexually transmitted diseases and disassociation of events,” Bateman-Neff said. “Victims escape to their ‘happy place’ while being abused instead of facing the reality of the situation. This causes them to give in to the abuse and eventually stop seeking help.”

There are some instances of trafficking where the victim is simply not given the option to leave such as those who find themselves drowning in a debt that cannot be paid off.

“In regards to immigrants, most of the time, U.S. citizens will promise them a place to stay, citizenship and a job,” Bateman-Neff said. “However, the trafficker overprices rent so they never become free of individual labor. This is common in nail salons and Chinese restaurants. If there is a rotation in workers or they know little English, they may be suspect of being trafficked.”

Despite the fact that many of these systems are run under the radar, organizations are taking strides to try to rescue these victims.

We now have female officers talk to these women away from the scene to try give them an opportunity to ask for help out of the situation without having to fear retribution from a nearby handler or pimp.”

“We now have female officers talk to these women away from the scene to try give them an opportunity to ask for help out of the situation without having to fear retribution from a nearby handler or pimp,” Vaughn said. “If they do indicate that they want out, we then can refer them to social services to help make that happen.”

It starts with speaking out, with standing up. It starts with believing that there are better things to come. This is the only way that people can find peace, to break the cycle and realize that they are more than a commodity for sale.

“One client we had was sold by a distant family member in Florida, and she found help after reaching a truck stop in Texarkana,” Bateman-Neff said. “We brought her in and offered a place to stay until she could reunite with her parents in Florida. We were able to find her home; however, her family’s Haitian values would not allow her to be a part of their family again due to the sexual assault she had been through. Our organization worked with a shelter in Florida near her home where she is placed today.” 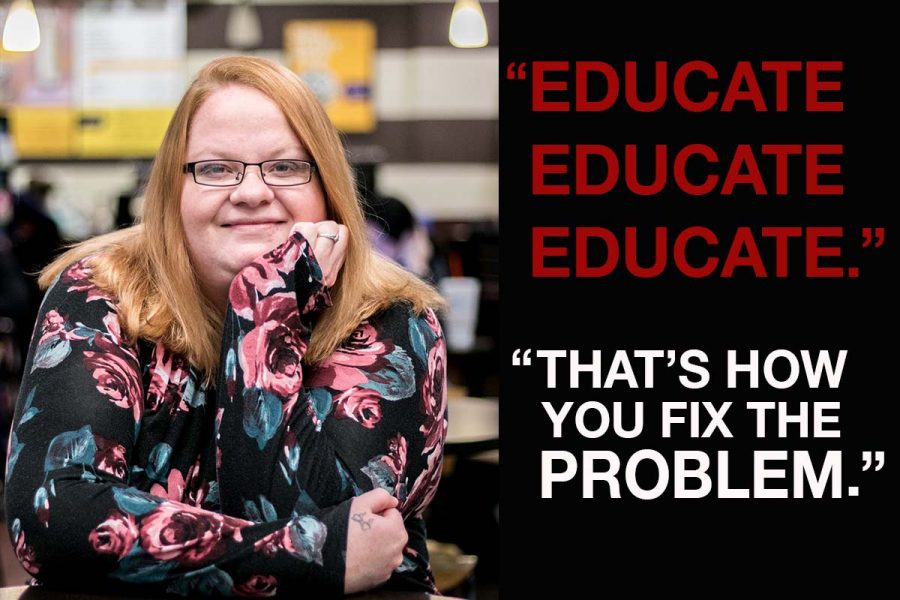 Silence, when left uninterrupted, is a dangerous thing. It allows for an abandoned trailer in the middle of the woods to become a prison for a little girl. She is left untouched, except by the men who stumble in with promise of exchange.

A promise made without consent by the mother, for her daughter. A promise that would scar her mind forever.

This was the childhood reality for Mandy Mills, now a mother of four. She was a victim of human trafficking and is one of the few who have survived it to tell the story.

“My mom had a coke addiction. When you’re on that stuff, it talks louder than the person. When I was 4, my mother was put in jail for selling me and my sisters for drugs. I don’t remember the interaction with men, but it was all documented,” Mills said. “I was put in foster care, but when I was 9, I went to go live with my father. We didn’t know until years later, but my father was involved in [trafficking as well]. For a year, I was molested by my dad. I had never learned what a normal father-daughter relationship was. I thought what he was doing to me was normal.”

Mills had never known what a real family looked like. The only family she had ever known had used her body for their own benefit, for drug money and personal pleasure.

For a year, I was molested by my dad. I had never learned what a normal father-daughter relationship was. I thought what he was doing to me was normal.”

“On my birthday, I would always wonder if [my mom] thought of me. I had no foundation, no history. I had no family to take me to prom. I was afraid of my dad. He threatened to kill me if I said anything,” Mills said. “For the longest time, I thought what had happened to me was pre-karma. I felt like I was being punished.”

Mills was later adopted by her Department of Homeland Security worker, and while the physical abuse may have been over, the emotional turmoil was not.

“It’s hard for me to this day to build relationships. Everyone who was supposed to love me in my family had hurt me. It’s hard to open doors for people. It’s always in the back of my mind,” Mills said. “I felt dirty because I would never be able to offer my husband virginity, and as a Christian, that’s important. It was taken from me. I felt like I had been cheated; they took innocence away from me.”

Mills soon learned, however, that the world stops for no one. She had the option to continue living behind closed doors in fear, but she chose to attempt living a life of normalcy. However, her past experiences of being trafficked and sexually abused inhibited her from doing so freely.

“I was taught to be warned that history repeats itself, and that is the worst thing you can say to someone. I was afraid that someday I’d be like my parents,” Mills said. “That put a barrier between me and my first son. I was afraid for him to touch me, to hug me and children need that nurturing.”

Mills struggled with trying to find peace with herself and urges people to understand that human trafficking is more than the stereotype people imagine.

“People think that it’s just some warehouse full of women, but sex trafficking is trading sex for something whether it’s for drugs, for money, for power, ” Mills said. “It’s not always just a warehouse full of women. It could be your neighbor doing it for a bump of drugs. People don’t realize that that is how those warehouses were built — one person agreeing with another person to trade a human being.”

This mentality to use another person to fulfill one’s own desires creates trust issues and corrupts relationships.

It’s not always just a creepy guy in the corner. It was my father and my mother. My dad was seen as the guy that everyone loved. He was great on the outside, but on the inside, he was the monster I had to face.”

“It’s not always just a creepy guy in the corner. It was my father and my mother. My dad was seen as the guy that everyone loved. He was great on the outside, but on the inside, he was the monster I had to face,” Mills said. “That’s what people misunderstand. They think, ‘Oh, that’ll never happen, to my kid.’”

However, it is happening and will continue to happen if there is no one who cares enough to stand up. It’s not just in foreign countries. It’s right here, in America.

It is important, above all other things, to remember that the millions of victims currently being trafficked are people. People who had lives. People who are scared to speak out. Mills survived and is turning her dark situation into light for others to break the cycle. To escape. Only through knowledge and understanding can this worldwide problem end.

“Educate. Educate. Educate. That’s how you fix the problem. If we get the word out, that’s how we fix this,” Mills said. “If it is broadcasted, it’s going to get smaller. You never know who might be there who needs someone to tell them they don’t have to live that life, to stand up for themselves. People don’t want to admit that it happened to them. They feel weak. Instead of letting it break them, let it build them.”