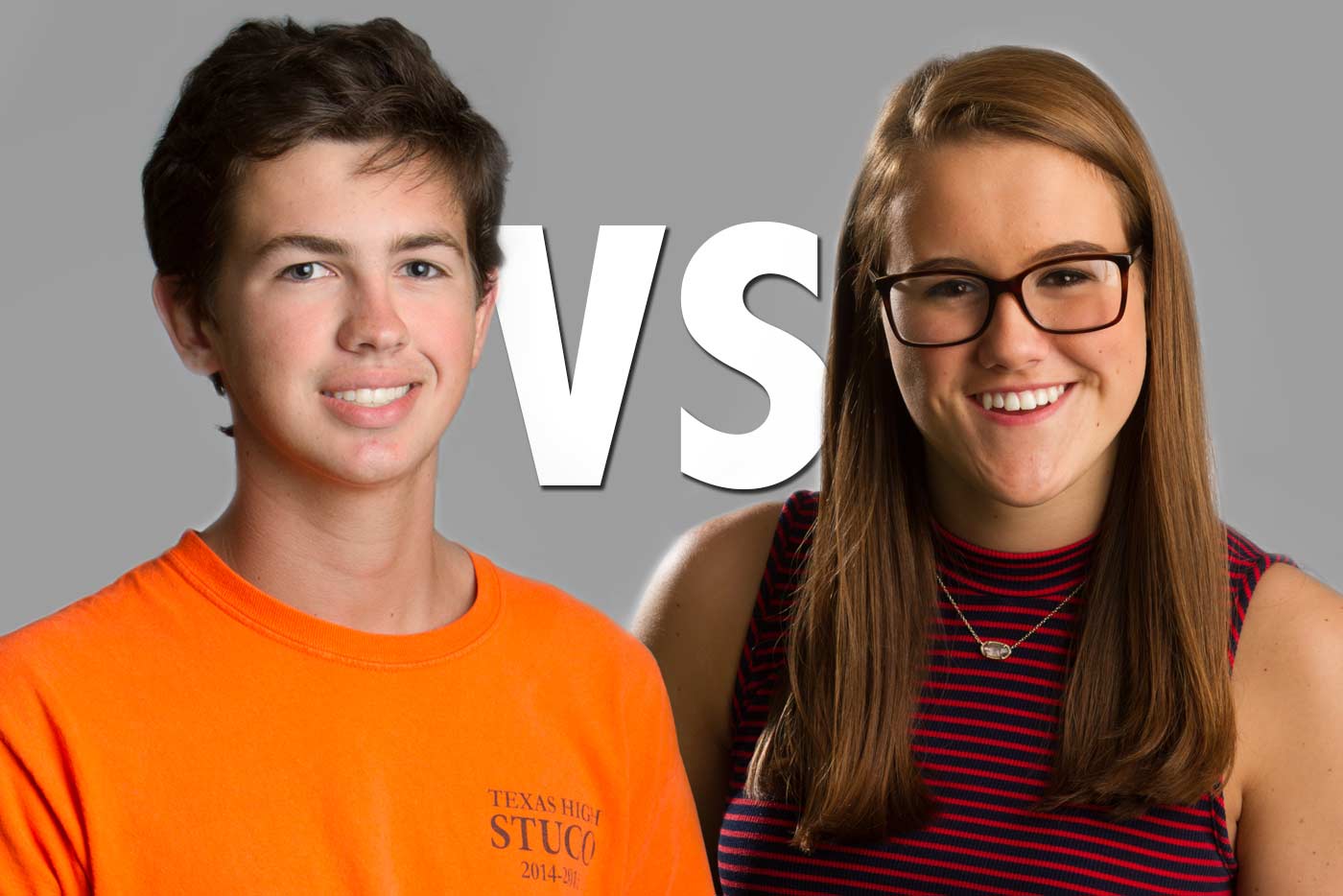 With the election of 2016 approaching fast, it is more important now than ever to be politically active. That political activity doesn’t just extend to eligible voters, however. Students in high school are the future presidents, governors, congressmen and voters of America, so having an opinion on the upcoming election and the presidential candidates is a step in the right direction.

Time to Trump the competition

Bernie Sanders, the surprising, upstart Socialist Democrat who garnered international fame for providing a fresh, different take on politics that appealed to younger, Democratic citizens who were tired of the same old, corruption and dishonesty that is a staple of the Clinton family, came out of nowhere to challenge the lone Democratic candidate Hillary Clinton.

Yet, even with all of his support, Bernie Sanders wasn’t able to win the nomination, because the leaders of the Democratic Party knew whose ‘payroll’ they were on. This meant that they would not allow for anyone to have a realistic chance of stealing the queen’s title, even if it meant illegally coordinating efforts between delegates, party leaders and the Clinton campaign to insure that the Democratic nomination would fall to Hillary Clinton. However, this isn’t the first case of Hillary Clinton conspiring to make herself more powerful, just another example in a career defined by corruption, selfishness and greed.

The Republican candidate Donald J. Trump however has had a career defined by success and achievement and not tainted with corruption.

Donald J. Trump is a businessman from New York who graduated from Fordham University in 1968. Trump took control of his family’s massive real estate company and renamed it the Trump Organization, quickly making it one of the most successful businesses in Manhattan, and helping create many of the landmark buildings located there.

In 1978, Trump took control of the bankrupt Pennsylvania Railroad, and in a matter of months was able to turn it around and make it as profitable as its peak in the early 1900s. He helped to expand the business to where it connected with multiple different sections, in Pennsylvania and New York.

Until 2015, Donald Trump was one of the most successful real estate moguls in the United States and would manage to keep his company alive during the great real estate collapse of the 1990s. By the early 2000s, Trump Organization had expanded from New York to Los Angeles and was more profitable than ever before.

Trump would turn his attention to politics in 2015 because he realized that there was no candidate more qualified to manage a stagnating economy and create jobs than someone who’d already been doing it for forty years. After a hard fought race against 21 other Republican candidates, Trump would win the Republican nomination and become the official Republican nominee.

One of the main differences between Trump and his competitor, Clinton, is that Trump has an actual economic plan that appeals to middle class and blue collar workers. He is going to allow tax breaks for middle class workers and American businesses, while also generally lowing taxes for all to allow for economic growth. Clinton has only an ambiguous Democratic concept that, in the end, won’t create jobs and instead will increase the amount of people dependent on welfare and make the rich even richer.

Across the board, Trump will lower taxes for all socioeconomic groups with the inclusion of incentives and tax breaks for companies that don’t outsource to poorer countries, where they could potentially hire cheaper less skilled workers.  These companies will allow many Americans the opportunity to no longer have to be reliant on the government or scared they won’t be able to put food on their family’s table by creating employment opportunities.

Many critics slam Trump because they believe he has no real knowledge on foreign policy or they believe he is too brash with his words and wouldn’t be able to correctly negotiate with other world powers. Hillary Clinton, on the other hand, they say has more experience since she served as Secretary of State. However, while serving as the Secretary of State, her personal email was hacked and it contained of 3000 emails that contained classified information, which has led to the deaths of undercover agents and unbelievable complications regarding global politics.

Clinton also has no real plan on defeating ISIS, which is now daily forcing hundreds of thousands of people to migrate from their homes, executing horrendous terrorist attacks, and jeopardizing the peace and sanctity of free countries all over the world. Trump plans on increasing the funding of NATO and working with the Russians, however to defeat an organization that endangers millions on a daily basis. Instead of training middle eastern troops and giving weapons to groups of people as done by both the Bush and Obama administration, which resulted in many soldiers deserting  the army and form their own terrorist group (essentially what happened with ISIS), he plans on taking the fight to ISIS because that is the only true way of solving a problem that plagues the entire world.

“When you love America, you protect it with no apologies.” Trump said.

As the voting day draws nearer and nearer, it should become clear that there is only one candidate that has America’s true interests at heart. One candidate who plans on re-establishing global and economic safety, the likes of which we won’ see if Hillary Clinton is elected. Just as Bernie Sanders found out and all of America would learn, Hillary Clinton is corrupt and will do whatever means necessary to accomplish her personal goals, even if it goes against the will of the people.

Over the past year, the Republican Party has struggled to choose between various nominees who have bombarded the American citizens with empty campaign slogans that demonstrate that they are the least qualified people for the most important and influential job in the country, perhaps the world. On the other hand, the Democrats have united to nominate, as President Obama testified, the most qualified person to be the President of the United States. It just so happens that she would also be the first woman President of the United States.

Hillary Clinton is not a newcomer to the American political scene. Having been First Lady for eight years, she has an unique perspective on how to efficiently run the country. Even without her experience in the White House, Clinton is more than qualified.

A graduate of Wellesley College and Yale Law School, Clinton worked for three presidential campaigns, including Jimmy Carter’s, as a young adult. She then served as a congressional legal counsel during the Watergate scandal. After President Nixon resigned, she moved to Arkansas where she taught at the University of Arkansas law school.

President Obama nominated Clinton to be Secretary of State, a position she held for eight years. Her diplomatic successes in confronting the challenges our nation faced across the globe in recent years definitely proves that she understands foreign policy, which is essential for the President to master.

Despite this wide experience and incredible credentials, Clinton’s friends and family say that the principal motivation of her life has been to serve others and that she will never lose sight of who she is fighting for and what is at stake. Clinton’s mother, Dorothy, was orphaned as a young child. This drove Hillary to enter public service and is a major reason she continues today to work to improve the lives of all Americans.

A major difference between the political parties’ candidates is that the Democratic nominee has a plausible agenda and plans to make the lives of American citizens better, while the Republican nominee has ill-conceived and impractical proposals that would harm our economy, still in recovery from the recession of 2008, and turn our “country made of immigrants” on its head, by deporting 11 million people, most of whom have families and jobs.

“We have to heal the divides in our country,” Clinton said. “Not just on guns, but on race, immigration, and more. That starts with listening to each other. Hearing each other. Trying, as best we can, to walk in each other’s shoes.”

Regarding the Republicans’ continued obsession with the matter of Clinton’s State Department email, she was urged by her predecessor to use her personal email account for non-confidential information while she was secretary of state. As Clinton recently said, this, along with attacks over Benghazi, are the ammo the GOP is continuously using to attempt to weaken her campaign.

If you watched any of the Republican National Convention in July, you will have heard a terribly pessimistic, pinched view of the future of the United States. With no real solutions presented, the convention merely spread blame and hate on the leaders of our country. This portrayal is not particularly conservative, nor Republican, and it’s certainly not American.

“Don’t let anyone ever tell you that this country is not great,” First Lady Michelle Obama said.  “That somehow we need to make it great again. Because this right now is the greatest country on Earth.”

If you are of voting age as this election approaches, there is a clear choice between one candidate with wide experience and the determination to improve the lives of the American people and another who is a racist and offensive candidate. Help shatter the glass ceiling.

“Little girls should grow up in a country where they can be anything they want to be–even President of the United States,” Clinton said.